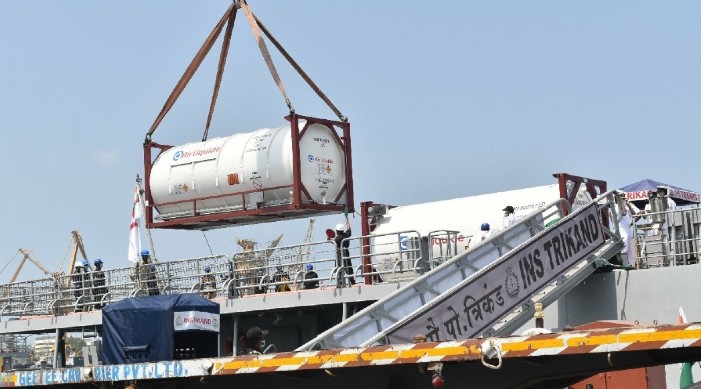 INS Trikand after arrival at Mumbai port on Monday.

Providing details of the operation, the Ministry of Defence said INS Airavat arrived in Visakhapatnam with eight cryogenic oxygen tanks and 3,898 oxygen cylinders along with other critical medical equipment and supplies from Singapore.

The ship had departed Singapore on May 5 with Oxygen tanks and cylinders sourced through various agencies in coordination with the High Commission of India.

INS Trikand, on the other hand, was deployed for the shipment of Liquid Medical Oxygen (LMO) cryogenic containers from Hamad Port in Qatar to Mumbai.

The ship arrived at Mumbai with 40 MT of liquid Oxygen. The consignment carried is part of the French mission “Oxygen Solidarity Bridge” to support India’s fight against COVID-19 pandemic. This was the maiden voyage of transshipping of French Air Liquide containers from Qatar to India, the defence ministry pointed out.

The Indo-French initiative is likely to result in shipping of over 600 MT LMO to India over the next two months.

The first consignment was handed over to the Maharashtra state authorities in the presence of Maharashtra’s Minister for Tourism and Environment Aaditya Thackeray and Consul General, French Consulate General, Mumbai Sonia Barbry.

The third ship, INS Kolkata, arrived at New Mangalore Port with 400 bottles of Oxygen, two 27 MT containers of Liquid Medical Oxygen and 47 concentrators that were loaded at Qatar and Kuwait.

While these ships entered ports to augment oxygen supply in three different states, two more warships are en route to India from Kuwait and one ship is at Brunei to embark medical supplies, the defence ministry said.