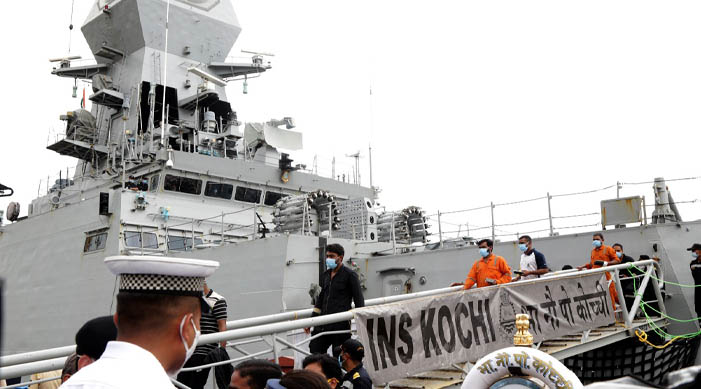 As of now, 186 crew members of barge P-305, and two from Tug ‘Varapradha’ have been rescued by naval ships and aircraft

Continuing its search and rescue operation, Indian Navy’s ships and aircraft for the third day on Wednesday remained engaged in searching the missing crew members of Accommodation Barge P-305, which sank 35 miles off Mumbai on May 17.

“INS Kochi, Kolkata, Beas, Betwa, Teg, P8I maritime surveillance aircraft, Chetak and Seaking helicopters are involved in the search and rescue operations,” the Ministry of Defence said in a statement on Wednesday.

INS Kochi which entered harbour today to disembark 125 survivors and mortal remains of four crew members, was immediately sailed out in the evening again to continue the search effort.

INS Kolkata is scheduled to enter Mumbai harbour at night on May 19 to disembark the survivors rescued from barge P-305 and Tug ‘Varapradha’ as well as the mortal remains of 18 crew members recovered during the operation.

On completion of its operations off Gujarat coast, INS Talwar has also been diverted to conjoin the other three naval ships searching for the missing crew of barge P-305, off Mumbai.

As informed earlier, INS Talwar was the ‘On Scene Coordinator’ off Gujarat coast and assisted Support Station 3 and Drill Ship Sagar Bhushan, which are now being safely towed back to Mumbai by ONGC support vessels. Food and water to the 300 odd crew members of these vessels was also provided by the naval helicopters from Mumbai, earlier in the day.

As of now, 186 crew members of Accommodation barge P-305, and two from Tug ‘Varapradha’ have been rescued by IN ships and aircraft and 26 mortal remains recovered.