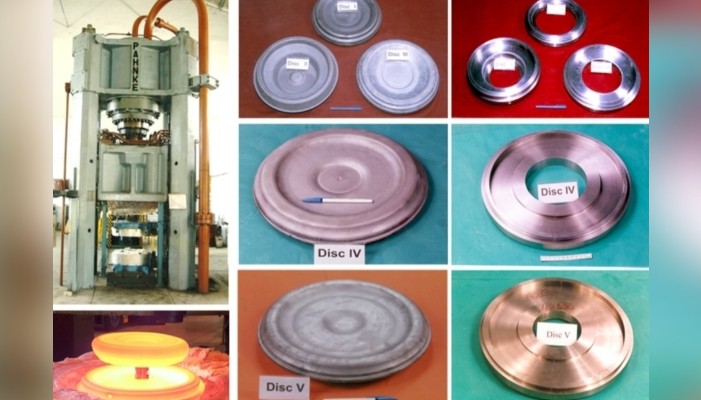 The annual requirements of these high value HPC discs are quite large.

With the Defence Research and Development Organisation (DRDO) developing a crucial technology, India has joined the limited league of global engine developers to have the manufacturing capabilities of critical aeroengine components.

The near isothermal forging technology established by the DRDO can produce all the five stages of high-pressure compressors (HPC) discs out of difficult-to-deform titanium alloy using its unique 2000 MT isothermal forge press.

This is a crucial technology for establishing self-reliance in aeroengine technology, the Ministry of Defence said on Friday in a press release announcing the important development.

In any aeroengine, the HPC Drum assembly has to be replaced after a specified number of operations or in case of damage. "The annual requirements of these high value HPC discs are quite large, warranting indigenisation," the defence ministry said, explaining the significance.

The technology has been developed by Defence Metallurgical Research Laboratory (DMRL), a premier metallurgical laboratory of DRDO at Hyderabad.

DMRL developed this forging technology by integrating various science and knowledge-based tools. "The methodology adopted by DMRL is generic in nature and can be tuned to develop other similar aeroengine components," the defence ministry said.

The compressor discs produced using this methodology met all the requirements stipulated by the airworthiness agencies for the desired application. The technology was then type certified and a letter of technical approval (LoTA) was accorded.

Based on the exhaustive component level and performance evaluation test results, HAL (E) and Indian Air Force cleared the components for engine fitment, the ministry said, explaining the different steps in the development process.

The defence ministry added that the HPC drum is 'a highly stressed sub-assembly" and is also subjected to low cycle fatigue and creep at elevated temperature. The raw materials and forgings for HPC drum are, therefore, required to be of the highest quality which can meet the specified combination of static and dynamic mechanical properties

The defence ministry added that apart from DMRL and HAL (E), agencies such as MIDHANI, CEMILAC and DGAQA worked in unison to establish this crucial technology.