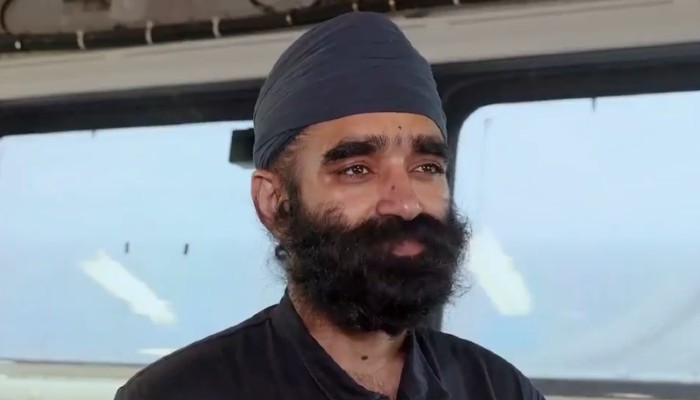 Currently settled in the UK, Jagjit Singh Grewal has a long family history in the Indian military

As the UK's Carrier Strike Group led by HMS Queen Elizabeth enters the Indian Ocean and prepares to meet the Indian Navy for joint exercises, one of its crewmembers embodies the unique living bridge that exists between the two nations.

Meet Jagjit Singh Grewal, an India-origin crewmember on the UK’s Carrier Strike Group (CSG) that is currently sailing into the Indian Ocean.

Grewal is Leading Engineering Technician in the Royal Navy.

He works in the Marine Engineering Department and is responsible for maintaining aviation fuel to the highest standard.

Currently settled in the UK, Grewal has a long family history in the Indian military.

“My grandfather and grandfather-in-law served alongside the British Army in the Second World War and received a Mention in Dispatches, Burma Star, Africa Star, War Medal and Defence Medal,” he informs.

“My father served in the Indian Air force and currently my wife’s brother and uncle are serving in the Indian Navy,” Grewal who also maintains fueling pumps on the flight deck so that the F-35B jets, Merlin helicopters and other aircrafts can operate to their optimum capacity says.

“I am focused on doing my job to the highest standards, but it is good to know I am maintaining my family links while working with the Indian military,” Grewal states.

As the CSG sails in the Indian Ocean, engaging with its allies on its 26,000 nautical miles long maiden deployment, Grewal feels a special delight being part of the crew, training in the waters near to his ancestral home.

The UK and India benefit from a unique living bridge of people, ideas, institutions, arts and culture, said the British High Commission in India in a statement on Tuesday, where it shared details about Grewal being part of the UK CSG.

“This includes an Indian diaspora of over 1.5 million people (2011 census) in the UK, contributing significantly to the UK’s prosperity via interests in business, politics, academia, medicine and the arts,” it mentioned.

The CSG has sailed into the Indian Ocean Region after having recently transited the Suez Canal where it had a series of successful engagements and operations in the Mediterranean.

It is now sailing East across the Indian Ocean towards India and will then meet with ships from the Indian Navy to conduct routine maritime exercises.

According to the British High Commission, the deployment represents the UK’s commitment to deepening diplomatic, economic and security ties with India and in the Indo-Pacific region.

"It demonstrates both the UK’s support for the freedom of passage through vital trading routes and for a free, open and inclusive order in the Indo-Pacific," it said.
Attachments area