PM Modi transfers about Rs 19,500 crore to over 9.75 crore farmers under PM-KISAN 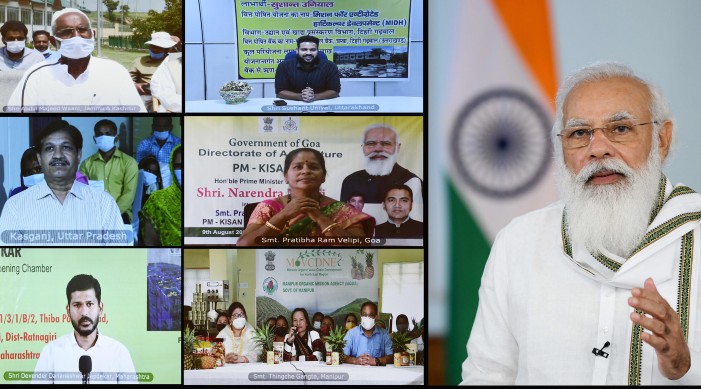 The government has so far transferred nine installments amounting to around Rs 1.57 lakh crore to farmers

With this, the government has so far transferred nine installments amounting around Rs 1.57 lakh crore to farmer families under the PM-KISAN scheme.

While interacting with the farmer beneficiaries, the Prime Minister talked about the sowing season and expressed the hope that the amount received today will help the farmers.

The Prime Minister said, “Our agriculture and our farmers have a big role in determining the condition of India in 2047, when the country completes 100 years of independence. It is time to give direction to India's agriculture to face new challenges and take advantage of new opportunities.”

“Where do we want to see India in the coming 25 years? When the country will complete 100 years of Independence what will the state of the country be? This will be decided by the farmers of this country,” he said.

PM Modi credited farmers with working hard despite the hurdles presented by the Covid-19 pandemic and ensuring bumper production last year. “This amount will help the small farmers a lot,” he said during the interaction. The Prime Minister also talked about ‘Mission honey bee’ and saffron production in Kashmir in his address.

He highlighted National Edible Oil Mission-Oil Palm i.e. NMEO-OP as a pledge for achieving self-reliance in edible oil. Today, when the country is remembering the Quit India Movement, on this historic day, this resolve fills us with new energy, he said. He said that through the National Edible Oil Mission-Oil Palm mission, more than Rs 11,000 crore will be invested in the cooking oil ecosystem. Government will ensure that farmers get all the facilities, from quality seeds to technology.

Earlier Agriculture Minister Narendra Singh Tomar said that before the ninth installment, the central government had disbursed about Rs 1.37 lakh crore to around 11 crore beneficiaries under the scheme. The government has linked 2.28 crore PM-KISAN beneficiaries with Kisan Credit Card scheme, under which they have been able to avail loan up to Rs 2.32 lakh crore so far.

He also said the farmers have worked hard despite challenges of COVID-19 and ensured bumper production last year. Better output is expected in the coming days due to continued farmers' efforts.

It should be noted that an annual financial benefit of Rs 6,000 is provided to eligible beneficiary farmer families, payable in three equal four-monthly installments of Rs 2,000 each, under the PM-KISAN scheme. The scheme was announced in February 2019 in the Budget. The first installment was for December 2018-March 2019 period. The fund is transferred directly to the bank accounts of the beneficiaries.