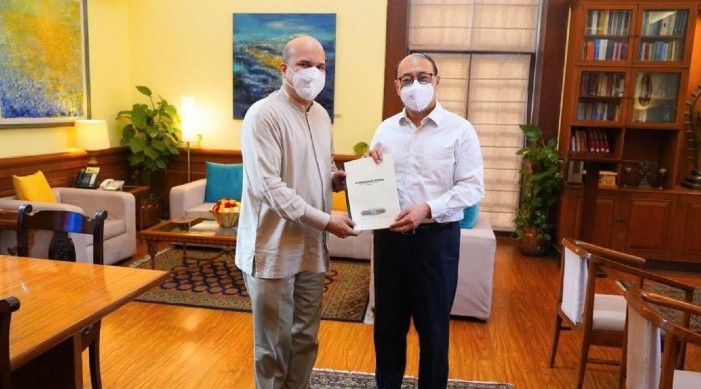 Good discussion on ways to further strengthen our close ties with Sri Lanka, which occupies a central place in India's #NeighbourhoodFirst policy," said a Twitter post by MEA Spokesperson Arindam Bagchi on Wednesday.

A statement from the Sri Lankan High Commission about Moragoda’s meeting with the Indian Foreign Secretary said the High Commissioner-designate paid a courtesy call on Shringla on Wednesday.

This was in keeping with the established practice of calling on the Foreign Secretary by newly arrived Heads of Diplomatic Missions in the Indian Capital, it noted.

According to the statement, Foreign Secretary Shringla warmly welcomed the High Commissioner-designate of Sri Lanka and stated that India was pleased to receive an eminent and experienced person like Moragoda as Sri Lanka's envoy to New Delhi who could steer and take forward Indo-Lanka relations.

During the discussion that followed, the two dignitaries discussed a range of issues that have mutual significance, it further stated.

High Commissioner-designate Moragoda emphasized on the importance of people-to-people contacts as a means of building trust, added the statement.

The High Commissioner-designate of Sri Lanka also presented a copy of his policy road map ‘Integrated Country Strategy for Sri Lanka Diplomatic Missions in India 2021/2023’ to the Foreign Secretary of India, it mentioned.

“The countries in our neighbourhood are of unique and special strategic significance to India, both because they are deeply interconnected with us through ties of geography, culture and history, and also because the internal and external dimensions of our policy – and theirs – intersect and overlap with each other,” he had said.

“Relations with them also impact our own states that border these neighbours,” Shringla had added.

He had argued that the neighbourhood remains our primary diplomatic arena and is first and foremost amongst our foreign policy priorities.

The primacy given to the neighbourhood in our diplomatic efforts is reflected in our Neighbourhood First policy which has become a central pillar of India’s foreign and security policies since 2014, Foreign Secretary Shringla had noted in his lecture.