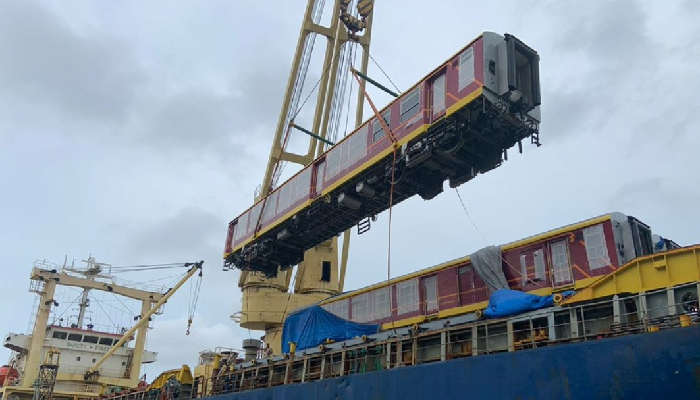 This was part of 160 coaches to be supplied by India to the island-nation.

A tweet in two parts from the Indian High Commission in Sri Lanka announced their arrival.

“Momentum of (Flag of) India-Sri Lanka cooperation in the transport sector continues with arrival of 20 more state-of-the-art railway passenger coaches at Colombo Port today,” the first part of the tweet said.

This consignment is a part of 160 coaches to be supplied to SL Railways by RITES Ltd through an Indian Line of Credit (LoC), said the second part of the tweet of the Indian High Commission in Sri Lanka.

“More coaches to arrive soon,” the second part of the tweet added.

Previously, in March this year, 10 state-of-the-art railway passenger coaches had arrived at the Colombo Port.

In 2018, India had signed an $82.64m contract agreement to deliver 160 passenger coaches to Sri Lanka Railways, under a concessional financing arrangement.

The agreement was signed by India’s state-owned engineering consultancy company RITES and the Government of Sri Lanka’s Ministry of Transport and Civil Aviation.

In June 2017, EXIM Bank of India and the Government of Sri Lanka signed a $318m line of credit (LoC) agreement for the supply of railway rolling stock, as well as modernisation of rail tracks.

The supply of 160 passenger coaches was part of the LoC.

All coaches being supplied will be customised to the meet requirements of the Sri Lanka Railways.