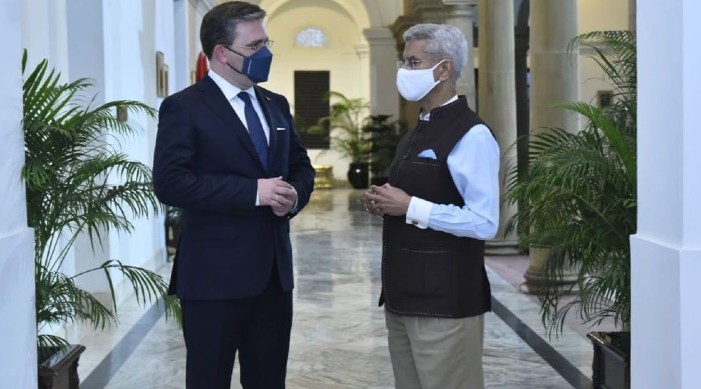 External Affairs Minister S Jaishankar on Sunday had a warm and fruitful discussion with his Serbian counterpart Nikola Selakovic and both sides agreed to take their cooperation, especially on economic front forward.

Talking about this development, the EAM tweeted: “Warm and fruitful discussions with Serbian FM Nikola Selaković. Reaffirmed our strong political bonds and independent stance in global politics. Agreed to take forward our long-standing cooperation, especially on the economic side.”

In November 2020, Selaković had a meeting with Indian ambassador to Serbia Subrata Bhattacharjee who had handed over the former a congratulatory letter on behalf of EAM Jaishankar on the occasion of his appointment as the Serbian Foreign Minister.

In the recent past, India and Serbia have ramped up high-level bilateral exchanges and closer interactions to boost trade cooperation and strengthen economic cooperation.

India and Serbia have exchanged several ministerial visits, Vice President M. Venkaiah Naidu paid a visit to Prime Minister of Serbia, Aleksander Vučić in September 2018 on the 70th anniversary of the establishment of diplomatic relations.

During that visit, the two countries had jointly released commemorative stamps on the renowned Serbian scientist and inventor, Nikola Tesla and the great spiritual leader of India, Swami Vivekananda.