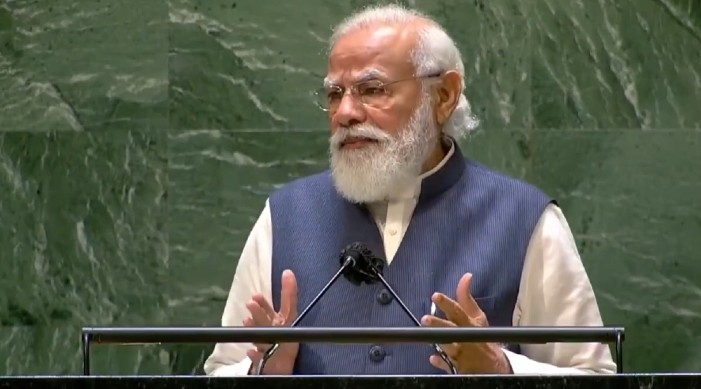 India is resuming the supply of Covid-19 vaccines to other countries, PM Modi said at the UNGA

Referring to India as a manufacturing hub for vaccines for the entire world, Prime Minister Narendra Modi has asked the world to make Covid-19 vaccines in the country.

Pointing out that India was engaged in developing and manufacturing Covid-19 vaccines despite its limited resources, he said India had also decided to resume the supply of vaccines to other countries.

Prime Minister Modi said India had developed the world's first DNA vaccine which can be used in people over 12 years of age.

An mRNA vaccine was in the final stages of development, he added.

Indian scientists were also in the process of developing a nasal vaccine, PM Modi said while addressing the high level segment of the 76th UNGA.

The Prime Minister spoke about the success of India's vaccination programme. While 800-million plus vaccine doses had already been administered, India was looking at further accelerating this, he said.

PM Modi referred to India's use of technology in the health sector, especially with regard to the ability to immunise hundreds of millions of citizens in the wake of the COVID-19 pandemic through the Co-win platform.

The theme of the General Assembly's debate was building resilience to hope to recovery from COVID-19, rebuild sustainably respond to the needs of the planet, respect the rights of people and revitalise the United Nations.

Speaking on the theme that democracies can deliver and democracies have delivered, the Prime Minister spoke about an array of flagship programmes and initiatives in India.

These include allowing people to open bank accounts, participate in health schemes that provide for quality health services, health insurance, and low cost housing for millions of citizens.

PM Modi pointed out that India had used technology in very many areas of the country's developmental activity, ensuring that it reached people in all parts of the country.

The Prime Minister also spoke of global value chains in the context of Aatam Nirbhar Bharat and climate change.

He noted that India had unilaterally gone in for a 450 gigawatt target by 2030.

"We were ahead in terms of meeting our expectations in Paris Agreement," he said.

Prior to his address, Prime Minister Modi was greeted by the President of the General Assembly Abdulla Shahid.