Future of technology has to be driven by Quad members: MoS Rajeev Chandrasekhar 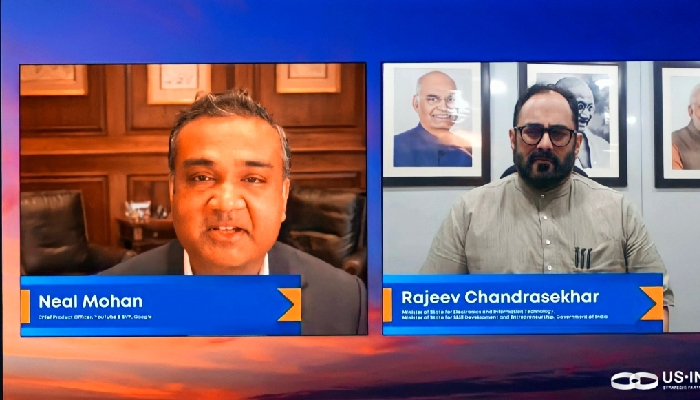 The four Quad members can shape the future of technology and future of the internet, he said

The future of technology has to be driven by the four members of the Quad, Union Minister of State (MoS) Rajeev Chandrasekhar has said.

This cannot be left to some dynamic of entrepreneurs and investors, he said while addressing US- India Strategic Partnership Forum’s 4th Annual Leadership Summit on Thursday.

"It has to be driven proactively by four members of the Quad, who have open societies, democracies who can shape the future of technology, future of the internet – one that remains open, safe and trusted, and accountable," the MoS for Electronics and Information Technology pointed out.

"At the front and center of the conversation, there is a need for political understanding on the future of technology" he added.

According to the minister, there was a significant behavioral change among citizens and the Government was catching up gradually.

"We are really reinventing our model, whether it’s skilling or creativity or producing content. This is a fact that disruption is deep and permanent. And I think this is the new normal that technology is creating new heroes every day, whether they’re unicorns in the tech space or content creators,” he noted.

The Summit was organized under the leadership of Chairman USISPF John Chambers and CEO & President USISPF Mukesh Aghi.

It touched upon resilience in the face of adversity and strengthening the US-India strategic partnership through trade, commerce, diplomacy, technology and healthcare in the era of the Covid-19 pandemic.

Talking about the impact of COVID-19 on overall digital ecosystem in India, Chandrasekhar said, “One of the sectors that has grown at a galloping pace in the Indian economy is the tech space. Apart from the short-term setback during the first two quarters of the pandemic, the tech space has really taken off, and for a lot of people, there has been a reset of ambitions and plenty of people now see it as a world full of opportunities”.

He also spoke about the Prime Minister’s vision on Digital India which clearly lays down that:
a) Technology has to be deployed in a way that it transforms & improves the lives of People
b) Technology has to Quantitatively expand & Qualitatively improve the Economy
c) Technology has to expand opportunities for Entrepreneurship, Jobs & Livelihood
d) India has to attain leadership in some or all aspects of the emerging force - ‘Internet’

The Minister credited the Digital India Programme for helping the Government reach out to the remotest parts of the country during the pandemic.

“The resilience and the robustness at which the economy has bounced back, a lot of that has to do with the early investment that the Prime Minister made in Digital India in the earliest years of his administration and embedding technology into governance”, said Rajeev Chandrasekhar.

During the meeting, he also talked about Geo-Politics, ICT Trade, Data Governance and Cross-Border Data Flows.