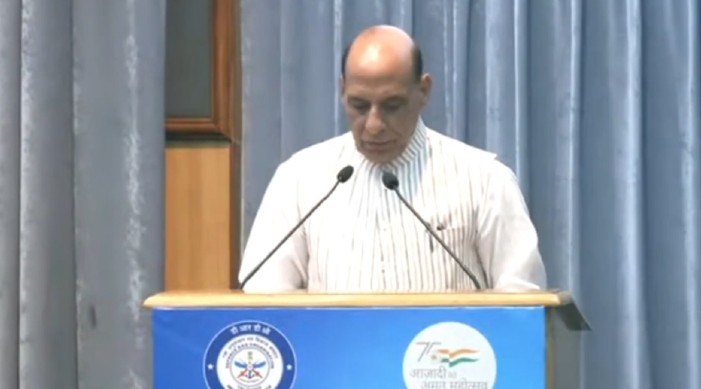 DRDO was playing a central role in the efforts of achieving self-reliance in defence manufacturing, he said

The government is committed to modernise the armed forces and equip them with latest machinery to deal with any challenge, Defence Minister Rajnath Singh said in Monday.

He pointed out that global security concerns, border disputes and maritime affairs had forced the world to focus on military modernisation.

Developing new technologies indigenously was the need of the hour, Singh said at the Felicitation Ceremony of ‘Dare to Dream 2.0’ Award Winners & Young Scientists of the Defence Research and Development Organisation (DRDO) in New Delhi.

He added that the vision of ‘Aatmanirbhar Bharat’ was to ensure that advanced technologies are developed domestically.

"It is extremely important not just for strengthening national security but also ensuring overall development of the country,” said the Defence Minister.

He gave away awards to 40 winners - 22 in the Individual category and 18 in the Startup category. He also launched ‘Dare to Dream 3.0’ to promote innovators & startups and provide a platform for the young ignited minds in the country.

He also gave away the DRDO Young Scientists awards for the year 2019. Sixteen DRDO scientists, under the age of 35 years, were awarded for their outstanding contribution in areas of their expertise.

Saying that India was one of the oldest countries in experience & culture and the youngest with about 60 per cent of the young population, he encouraged the youth to observe, learn & create new innovations and play their part in taking the country to greater heights.

Singh lauded the DRDO for playing a central role in the Government’s efforts of achieving self-reliance in defence manufacturing and contributing immensely in enhancing the capacity & capability of the Armed Forces even in the rapidly changing geo-political situation.

“DRDO is not only trying to match the capabilities of technologically advanced countries, but is also equally engaged in innovation of new technologies. The new generation programmes of DRDO will upgrade our Armed Forces in future as well,” the Defence Minister hoped.

Three products/systems indigenously developed by DRDO were also handed over to the Armed Forces. These are:

ARINC818 Video Processing and Switching Module
The module, developed for the Indian Air Force, was handed over to the Vice Chief of Air Staff Air Marshal Sandeep Singh. It is a state-of-the-art module with high bandwidth, low latency, channel bonding, easy networking and will cater to 5th generation aircraft development programmes.

Sonar Performance Modelling System Developed for the Indian Navy, the system was handed over to Vice Chief of Naval Staff Vice Admiral Satish Namdeo Ghormade. It is useful for Indian Naval ships, submarines and under water surveillance stations etc.

Bund Blasting Device Mk-II
The device, developed for Indian Army, was handed over to the Vice Chief of Army Staff Lt Gen CP Mohanty. It is used to reduce the height of Ditch-cum-Bund obstacles to enhance the mobility of mechanised infantry during wartime.

Directed Research Policy provides framework for establishment of Advanced Technology Centres and Research Cells in academic institutes for focussed research on identified subjects such as futuristic surveillance and defensive and offensive capabilities.

‘Long Term Directed Research Policy’ was recently approved by the Government to support & provide impetus to outcome and application oriented directed research in collaboration with academia. The Records Management Policy aims to further strengthen the records management activities of DRDO.