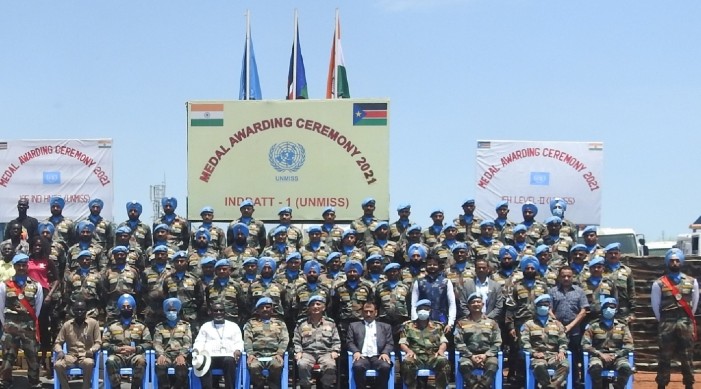 Indian peacekeepers were honoured for their service to the cause of durable peace.

In recognition of their committed service to the cause of durable peace in the world’s youngest nation, over 800 peacekeepers from India serving in the UN mission in South Sudan have been awarded with a prestigious UN Medal on completion of their deployment.

As per a report on the United Nations Mission in South Sudan (UNMISS) website on Monday, Indian peacekeepers serving for peace in Malakal, Upper Nile, have always risen to any challenges that may arise in their area of operations.

That’s why 836 peacekeepers from India were recently awarded the prestigious United Nations medal for their committed service to the cause of durable peace in the world’s youngest nation, it added.

According to the report, UNMISS Force Commander, Lieutenant General Shailesh Tinaikar, applauded the Indian battalion for successfully completing their tour of duty.
“When all of you arrived in Upper Nile state, it was a time of great flux,” said the Force Commander at the event.

“You had to assume operational responsibility immediately with the threat of imminent intercommunal clashes looming over you. Your presence and patrolling acted as a much-needed deterrent at the time, enabling civilians to go about their daily lives without fear,” he added.

Force Commander Tinaikar also lauded the efforts made by Indian peacekeepers in rescuing and sheltering 32 humanitarian colleagues in Renk and ensuring their safe evacuation to the country’s capital, Juba.

The report further said that for his part, Vishnu Sharma, India’s Ambassador to South Sudan and also the guest of honour at the medal parade, echoed Force Commander Tinaikar.

“Your courage, commitment and sacrifice to the cause of durable peace in South Sudan is a beacon of hope for the communities you are on the ground to serve. You have done the United Nations and your country very proud,” said Ambassador Sharma.

The report further added that the ambassador made special note of the contributions of Indian veterinarians who have treated thousands of animals and built capacities among livestock owners on animal management, thereby boosting their economic stability.

It stated that Christian Mikala, the Acting Head of the UNMISS Field Office in Malakal acknowledged the peacekeepers’ consistent engagements with local communities.

“You have been instrumental in extensive patrolling in your area of responsibilities and have built a relationship of trust and confidence with communities across Upper Nile,” stated Mikala, according to the report.

“You should all wear your medals with pride,” Mikala was quoted as saying in the report.

For Colonel Neeraj Tiwari, Commander of the Indian battalion, this deployment was all about going the extra mile for the communities they were on the ground to serve.

“We hope we will be remembered as having left a positive legacy of peace, capacity building and we wish the South Sudanese the very best as they progress in building a sustainable peace from the grassroots to the very highest levels of society,” he averred, it further noted.

The meaningful and colorful event included a cultural performance by peacekeepers as well as South Sudanese folk artists, the report added.