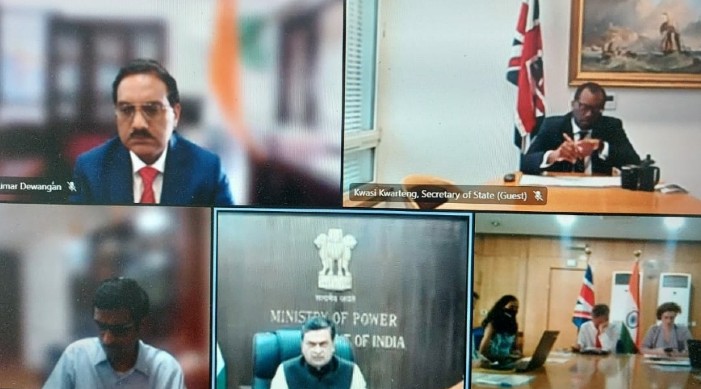 The third India-UK Energy Dialogue was held in virtual mode.

India and the UK have agreed on close cooperation to drive the clean energy transition in the power sector.

The issue was discussed at the 3rd India-UK Energy for Growth Partnership -Ministerial Energy Dialogue held on Friday.

The Energy Ministers spoke in detail on the ongoing Energy Transition activities in their respective countries with focus on renewables, including solar, offshore wind, storage, EVs, alternative fuels, said an official press release.

The meeting took place just three weeks ahead of the UN COP26 conference.

"The dialogue concluded with both sides underlining the importance of international cooperation in securing affordable and sustainable energy for the world while setting in motion concrete action plans for driving the clean energy transition in Power Sector," a press release issued by India's Ministry of Power said.

He hoped that the One Sun One World One Grid (OSOWOG) initiative launched by Prime Minister Narendra Modi could act as a promising alternative to support the RE integration in the grid.

“As we gear up to host the UN COP26 summit next month, today the UK and India have made important progress in outlining how this deep partnership can continue to deliver green growth for both countries powered by clean energy," Kwarteng was quoted saying by a news release issued by the British High Commission in India.

“Supporting the move to clean energy is a shared priority, and our new joint programme on smart power, renewable energy and storage will help to increase investment in renewable projects, while creating new high skilled jobs across both nations as we build back greener,” added Kwarteng.

The UK announced a $1.2bn package of public and private investment in green projects and renewable energy in India at the 11th Economic and Financial Dialogue (EFD) between the UK and India held last month.

These investments will support India’s target of 450GW renewable energy by 2030.