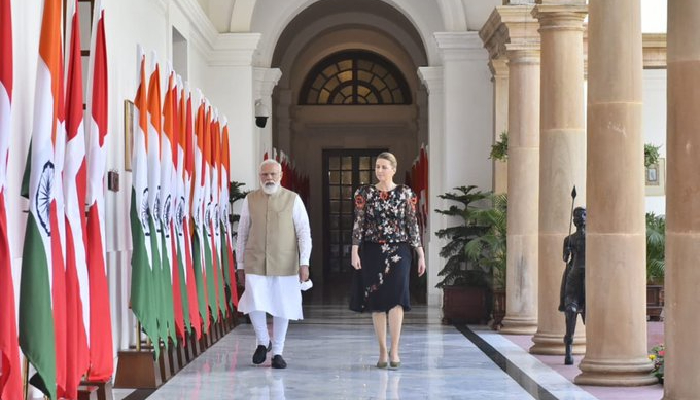 India and Denmark have agreed to an aspiring and results-oriented Green Strategic Partnership. They have also agreed to a five-year joint action plan (2021-2026), which calls for renewed focus on climate and energy and greening of the economies of the two countries.

As per the Joint Statement issued after the bilateral meeting between Prime Minister Narendra Modi and visiting Denmark Prime Minister Mette Frederiksen on Saturday, both sides agreed that strengthening of the Green Strategic Partnership will be important for green growth and will lead to mutually beneficial cooperation.

The two countries also decided to take stock of progress at an appropriate future occasion and to consider ways to further enhance and strengthen the Green Strategic Partnership.

As per Joint Statement, the two Prime Ministers focused on ways to augment and consolidate green and low carbon growth as reflected in the 5 year Action Plan.

This includes the following sectors: water; environment; renewable energy and its integration into the grid; climate action; resource efficiency and circular economy; sustainable and smart cities; business; trade and investments including cooperation on Intellectual Property Rights; maritime cooperation, including maritime security; food and agriculture; science, technology and innovation; health and life science; cooperation in multilateral organizations; as well as cultural and people-to-people relations.

The two Prime Ministers noted the immense potential of developing renewable energy in India and in this context welcomed the new manufacturing and technology investments from Danish companies in Gujarat and Tamil Nadu.

They were encouraged by the extensive and broad-based collaboration in the field of energy; including wind power, power modelling and grid integration, which has expanded at an impressive pace since their virtual summit in September 2020.

The two Prime Ministers agreed to enhance the commercial cooperation with new technologies, in particular green hydrogen, E-mobility and storage. The two Prime Ministers noted the active global collaboration on new green energy technologies, including under EU Horizon Programs and Mission Innovation, and emphasized the Indian-Danish collaboration for low emissions as well as in the planned joint call for research and development projects in the area of green fuels, including green hydrogen.

Both Prime Ministers stressed the importance of collaboration in the water sector and welcomed initiatives between the two governments in the field of urban and rural water, wastewater management and river rejuvenation.

The two Prime Ministers noted the possibility of upscaling activities in the fields of water supply, wastewater management and river rejuvenation from city level to state level/basin level and encouraged further exploring this option with the relevant authorities. The two acknowledged that collaboration can improve the sustainable water supply including reducing water loss, water resource management and transition from wastewater handling to resource recovery in India.

Danish Prime Minister Mette Frederiksen referred to the Danish ratification of the International Solar Alliance (ISA), noting the significant potential of this initiative to contribute to the collective universal climate action, including by combining efforts to promote all sources of renewable energy.

As India and Denmark are Members of LeadIT, both Prime Ministers also agreed to pursue cooperation on hard-to-abate sectors in relation to the Leadership Group on Industry Transition.

The two Prime Ministers confirmed the collaboration on initiatives to combat the global challenge of climate change, in accordance with goals set out by the Paris Agreement and the UN Sustainable Development Goals (SDGs).

The Prime Ministers stressed that climate change is a global crisis that requires global leadership; Denmark and India agreed that the urgency and global solidarity in achieving a just and fair transition to a greener and sustainable future requires common actions in accordance with national circumstances and the principles of equity, and commitments under the Paris Agreement.

The Prime Ministers agreed that global ambitious action to mitigate and adapt to climate change must be aligned with the best available science and with the findings of the Sixth Assessment Report of the Intergovernmental Panel on Climate Change.

The Prime Ministers also agreed that global collaboration is essential for ensuring a sustainable post pandemic economic recovery. The Prime Ministers discussed the upcoming COP26 in Glasgow, and agreed on the need for concrete and ambitious results from COP26, and to work closely together in this regard.

Both Prime Ministers stressed the importance of identifying relevant sources of sustainable financing and investments, noting with satisfaction the substantial interest and commitment among private financing institutions.

They confirmed their commitment to promote investments and project development through enhanced dialogue and cooperation on favourable framework conditions. Furthermore, the Prime Ministers agreed that transfer of innovative and affordable technologies is vital for the promotion of low carbon energy and industry transition.

The Prime Ministers expressed a common ambition to expand the commercial cooperation within energy to include e-mobility, offshore wind, fuel-technologies, including green hydrogen and green methanol, among others.

The two Prime Ministers noted that the UNLEASH initiative will be launched in Bengaluru, India, in 2022. This will support the role of the youth in fostering entrepreneurship necessary for reaching the Sustainable Development Goals.

The two Prime Ministers welcomed the steps already taken to implement the Green Strategic Partnership, including the 3-year work plan on sustainable water supply in support of the Jal Jeevan Mission, the Letter of Intent dated July 5, 2021 between the Ministry of Housing and Urban Affairs and the Government of Denmark in the field of sustainable and smart urban water sector as well as the Memorandum of Understanding between the Centre for Ganga River Basin and Management Studies, Indian Institute of Technology, Kanpur (cGanga), and Innovation Center Denmark, Government of Denmark, to support the development of technological solutions for a clean Ganga river.