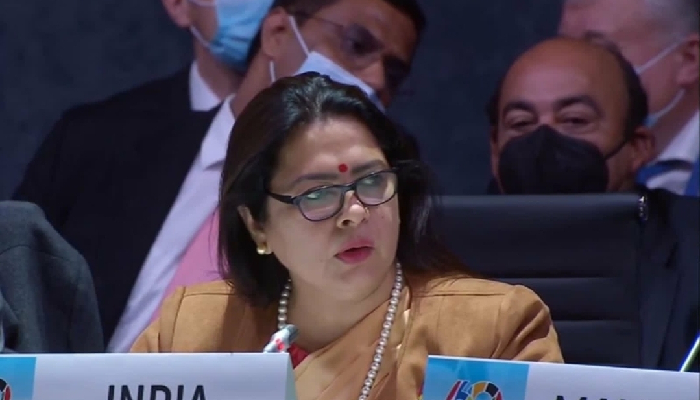 NAM needs to check such tendencies, MoS Lekhi said in an apparent reference to Pakistan

In a veiled reference to Pakistan, India on Monday said the Non-Aligned Movement (NAM) has become increasingly ineffective due to the tendencies of some members members to deliberately take up divisive issues, or to use this platform for bilateral score-settling, thereby creating division.

Minister of State for External Affairs Meenakashi Lekhi highlighted this trend in a statement at the High Level Commemorative Meeting to mark the 60th Anniversary of the Non-Aligned Movement (NAM) in Belgrade, Serbia.

“In recent past, while NAM has been effective in some areas where we have spoken in one voice to defend our interests and those of developing countries; we have increasingly become ineffective in certain other areas, particularly in tackling new and emerging challenges,” MoS Lekhi, who attended the meet as the Prime Minister's Special Envoy, said.

“This is primarily due to the tendencies of some NAM members to deliberately take up divisive issues, or to use NAM platform for bilateral score-settling, thereby creating division among us,” Lekhi stated, in an apparent reference to Pakistan.

“Such pursuance of partisan agenda rather than working towards strengthening our collective effort has resulted in an increasing number of Members having to disassociate themselves from NAM positions,” the Minister argued.

“At another level, we are splitting ourselves into camps reflecting geo-political divides outside NAM rather than strengthening NAM itself to become independent pillar and influential voice in international forums,” she observed.

“NAM was created to pursue the collective interest of developing countries. This has been our strength, but we risk becoming irrelevant if we do not check the divisive tendencies within our Movement,” Lekhi pointed out.

“We also need to revisit and revitalise our methodology of discussion and decision making, following arbitrary and non-criteria based procedures will not hold us in good step,” she suggested.

According to the MoS, "whether we are willing to make compromises for the sake of our collective interests, and for the sake of effectively addressing new global challenges like the pandemic, terrorism and climate change, will finally determine whether or not NAM remains relevant in a fast challenging world".

She further stated that following recent developments in Afghanistan, it is absolutely imperative that the approach of the international community is guided by UN Security Council Resolution 2593, that was adopted under India’s August Presidency of the UNSC.

“It has clearly reaffirmed that Afghanistan soil cannot be and should not be used to mount terror attacks against any country,” she reiterated.

The Minister noted that the way in which COVID19 pandemic had wreaked havoc across the globe had exposed the inadequacies of the multilateral system in effectively responding to perhaps the biggest challenge of contemporary times.

“NAM, with its diversity, shared developmental experience, and youthful and dynamic population, has the potential to take the lead and be a force for global good,” she pointed out.

Asserting that India had been part of the solutions rather than the disruptions, Lekhi said India had supplied more than 70 million doses of vaccines to 93 countries and two UN entities including the UN Peacekeeping Force.

“As our own domestic requirements are going to come down by virtue of inoculating population with 940 million doses of vaccines, we will be expanding our cooperation in the field of COVID-19 vaccines, along with Cowin as an IT platform which has been made available to all or anyone seeking that support,” she added.

It may be recalled that last year, India had strongly objected to Islamabad raising the issue of Kashmir at the NAM Forum.

India had given a tough message to Pakistan on the issue of ‘territorial integrity’ at the virtual Ministerial Meeting of the Non Aligned Movement (NAM) when New Delhi had asked individual members to stop and think before raising issues that were not on the agenda and which found no resonance in the wider membership.

“NAM never was and never can be a platform for pursuits aimed at undermining the territorial integrity of a State by another State,” Minister of State for External Affairs V Muraleedharan had said in his statement last year.