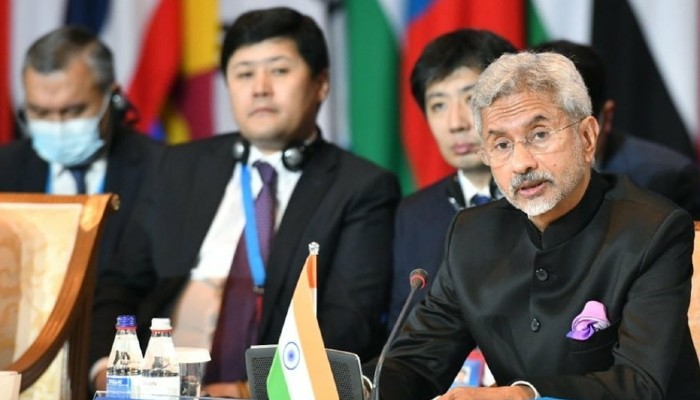 External Affairs Minister S Jaishankar has called upon the international community to unite against the menace of cross-border terrorism as seriously as it does on issues like climate change and pandemics.

"Cross-border terrorism is not statecraft; it is simply another form of terrorism," he said at the 6th Conference on Interaction and Confidence-Building Measures in Asia (CICA) Foreign Ministers Meeting on Tuesday.

"If peace and development is our common goal, the biggest enemy we must overcome is terrorism," Jaishankar pointed out. "In this day and age, we cannot countenance its use by one state against another," he added.

According to Jaishankar, any calculation that extremism, radicalisation, violence and bigotry can be used to advance interests was a very short-sighted one.

Such forces would come back to haunt those who nurtured them, he warned.

"Lack of stability will also undermine our collective efforts to get Covid under control. The situation in Afghanistan is, therefore, of grave concern," the External Affairs Minister noted in his statement at the conference held in Kazakhstan.

Another aspect Jaishankar highlighted was participative and consultative decision-making.

Eight decades ago, when the current global order was being debated, it was a very different world, he said.

"The members of the UN have quadrupled since then. Asia especially, but also Africa and Latin America, are inadequately represented in its decision-making. The limitations of the multilateral response to the Covid pandemic were starkly evident. This only makes a case for reformed multilateralism more urgent with each passing day," Jaishankar emphasized.

His statement also focused attention on the Covid-19 pandemic and the "equally pressing" challenge of climate change.

"Both pandemic and climate change require genuine and sincere international collaboration. They must ensure accessibility and affordability, especially to the most vulnerable. And they are a call for us all to adopt a more sustainable lifestyle," he observed.

EAM Jaishankar said India had always seen the world as a family, expressed in the concept of ‘VasudhaivaKutumbakam’.

"Our belief is expressed in a variety of ways, including in meeting challenges and finding solutions together. This was clearly in evidence during the Covid pandemic, when we provided vaccines, medicines and medical supplies, as well as expertise to more than 150 nations," he pointed out.

Jaishankar also referred to connectivity as he described economic and social activity as being intrinsic to progress and prosperity.

"Asia, in particular, suffers from a deficit of connectivity which is so essential for that purpose," he noted.

"As we build these modern arteries of commerce, it is absolutely essential that the most basic principles of international relations are observed. Respect for the sovereignty and territorial integrity of nations rank foremost among them," Jaishankar said.

He also highlighted the importatance of connectivity building being a participative and consensual exercise, based on financial viability and local ownership.

"They must not serve other agendas," EAM Jaishankar maintained.

He also pointed out that the post-pandemic world requires resilient and reliable supply chains and encourages additional engines of economic growth. It also puts a premium on greater trust and transparency, he added.

"CICA can make a notable contribution to all these endeavours that will enhance security and sustainable development in Asia," Jaishankar said.