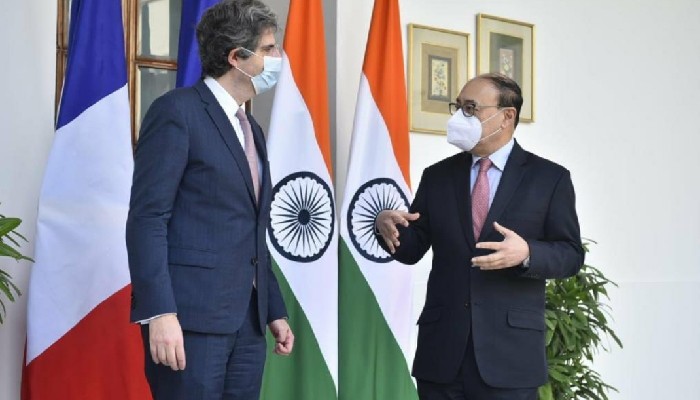 India and France are exploring the potential for greater cooperation in sectors such as defence and security, space, cybersecurity and the digital economy.

This was part of bilateral discussions during between Foreign Secretary Harsh Vardhan Shringla and Secretary-General, Ministry for Europe and Foreign Affairs of France François Delattre on Tuesday.

The Foreign Secretary and the Secretary-General also discussed regional and global issues of mutual interest and reaffirmed their shared commitment to a multipolar world and faith in multilateralism.

According to information provided by the Ministry of External Affairs (MEA) after
the meeting, the two sides also discussed cooperation in blue economy, education and people-to-people contacts, energy, health and climate change.

The Ambassadors of India and France joined the talks.

In his opening remarks, Foreign Secretary Shringla said this FOC comes close at the heels of a very fruitful visit by Florence Parly, Minister for Armed Forces of France on December 17 to hold the third annual Defence Dialogue with Defence Minister Rajnath Singh.

"To tap the full potential of bilateral trade and economic relations, both sides reiterated their commitment to restarting negotiations on the India-EU Free Trade Agreement," the MEA said.

According to official data, India’s trade with France has witnessed a steady rise in the last decade reaching USD 10.75 billion in 2020. Despite the pandemic, it is estimated that bilateral trade between the two countries in 2021 has reached USD 8.85 billion.

France has emerged as a major source of FDI for India with more than 1,000 French establishments already present in India.

France is the 11th largest foreign investor in India with a cumulative investment of USD 9.86 billion from April 2000 to June 2021 which represents 1.80% of the total FDI inflows into India.

There are around 200 subsidiaries of Indian businesses established in France, which employ more than 6,000 people.

Among Indian investments in France, majority are in IT services, pharmaceuticals/biotechnologies and hospitality sectors.

During Tuesday's meeting, the two sides also held discussions on a number of regional and global issues of mutual interest, including cooperation in the European Union in view of the forthcoming French Presidency, Indo-Pacific, UNSC, situation in Afghanistan, among others.

As part of his India trip, Delattre is also visiting Mumbai, where he will meet other Indian officials.