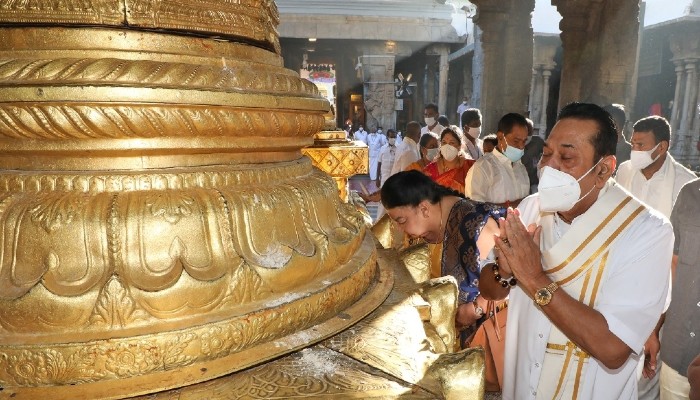 They are on a two-day pilgrimage to India.

The Indian High Commission in Sri Lanka tweeting about PM Rajapaksa’s visit to the temple said, “Hon'ble PM @presrajapaksa had the Darshan of Lord Venkateswara at #TirumalaTirupatiDevasthanams today morning.”

On Thursday, Prime Minister Rajapaksa accompanied by his wife arrived in Tirupati by a special aircraft from Colombo and was accorded a traditional welcome.

“Traditional welcome to a long-standing friend of #India and devotee of #TirumalaTirupatiDevasthanam,” another tweet by the Indian High Commission had said on Thursday.

According to another Twitter post by the Indian High Commission, the Sri Lankan PM’s last pilgrimage to the sacred shrine of Tirumala was in February 2020, when a special puja was performed at the Devasthanam on the first anniversary of his current term.

“Hon'ble PM @presrajapaksa reached #Tirupati on a pilgrimage. His previous pilgrimage to the sacred shrine was in February 2020. A special Puja was performed at the Devasthanam on the first anniversary of his current term,” the tweet of the Indian High Commission said.

India and Sri Lanka have a legacy of intellectual, cultural, religious, spiritual and linguistic interaction and the relationship between two countries is more than 2,500 years old.