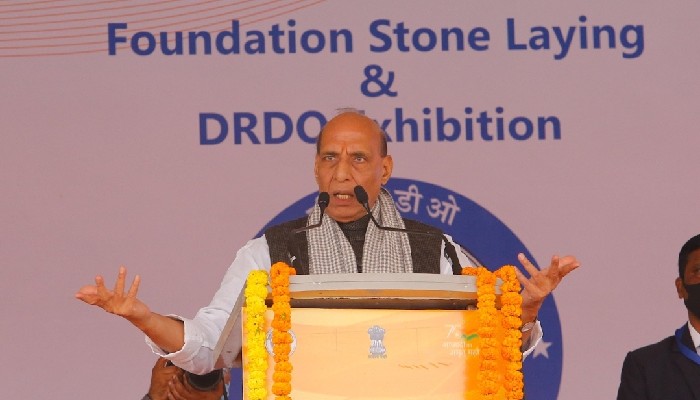 The purpose of the BRAHMOS supersonic cruise missile system is to act as a deterrent, Defence Minister Rajnath Singh has said.

"We have never been an aggressor, but are ready to defend our people against any nation with hostile intentions," he said on Sunday.

According to Singh, the BRAHMOS system not only reflects the technical cooperation between India and Russia, but also the long standing cultural, political and diplomatic ties.

He termed BRAHMOS as the world's best and fastest precision-guided weapon which has strengthened India's credible deterrence in the 21st century.

BRAHMOS has empowered the Armed Forces and raised India's military stature at the international level. The BRAHMOS-NG has proven its firepower in land, water and air will greatly strengthen the modern combat capability of the Indian Army in the coming years, the Defence Minister added.

The BRAHMOS Manufacturing Centre, announced by BrahMos Aerospace, is a modern, state-of-art facility in the Lucknow node of UP DIC. It will cover over 200 acres and produce the new BRAHMOS-NG (Next Generation) variant, which carries forward the lineage of the BRAHMOS weapons system.

This new centre would be ready over the next two to three years and will commence production at a rate of 80-100 BRAHMOS-NG missiles per year.

The Defence Technologies & Test Centre (DTTC) is being set up to accelerate the growth of the defence and aerospace manufacturing clusters in Uttar Pradesh Defence Industrial Corridor (UP DIC). It will consist of the following six subcentres:

Singh exuded confidence that the two units will play a pivotal role in bolstering national security, defence production as well as the economy of Uttar Pradesh.

He added that the establishment of these units will generate revenue; provide employment opportunities to the youth and help in achieving ‘Aatmanirbhar Bharat’ envisioned by Prime Minister Narendra Modi.

The message of Make in India, Make for India and Make for World has been sent out globally, Singh said.