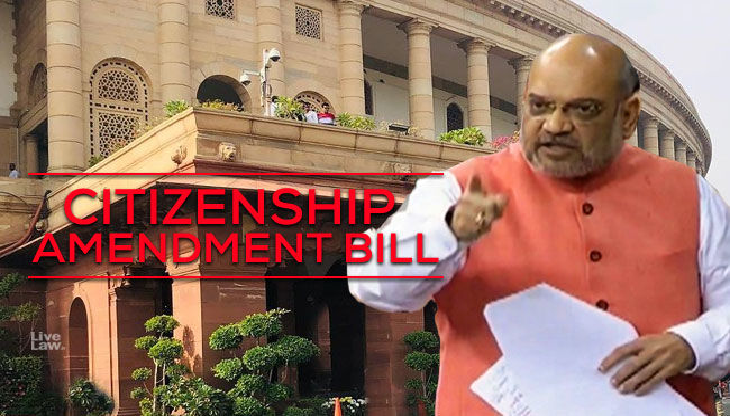 A false narrative is being purposefully constructed so as to instigate fear, violence and division in Indian society, just for the sake of opposing the government of the day

For forces that would go to any length to discredit the Indian government on national and international forums, deceit is a tool of the game. This game of lies, distortion of facts and unabashed disinformation campaign goes beyond politics, and beyond borders.

A false narrative is being purposefully constructed so as to instigate fear, violence and division in Indian society, just for the sake of opposing the government of the day. International forces are part of this game, using this false narrative to damage India’s image globally.

The latest victim of the massive disinformation campaign is the Citizenship Amendment Bill 2019 (popularly referred to by its abbreviation: CAB). The Bill, after being duly passed by both Houses of Parliament and approved by the President of India, has now become a law i.e. Citizenship Amendment Act (CAA).

The focus of CAB/CAA is simple – it aims to provide relief to minorities who have suffered religious persecution in three countries that share borders with India i.e. Pakistan, Bangladesh and Afghanistan. The relief is limited to those minorities who have already come to India to escape the persecution, with the cutoff being 2014.

One of the worst lies being spread is that this law targets Indian Muslims.

The truth is that the Bill has nothing to do with Indian citizens – Muslim or otherwise. It simply seeks to grant citizenship to religious minorities from Pakistan, Bangladesh and Afghanistan who have already come into India.

CAA merely allows people of six minorities from these three countries, who came to India on or before 31st December 2014 to escape religious persecution, to apply for Indian citizenship. The religious minorities thus specified are Hindus, Jains, Buddhists, Sikhs, Parsis and Christians. Since Muslims are in majority in all the three countries, they are obviously not included.

A recent article by the New York Times titled “India Steps Toward Making Naturalization Harder for Muslims” has made sweeping statements and insinuations with clearly mischievous intent. It’s first para it says: “India took a major step toward the official marginalization of Muslims on Tuesday as one house of Parliament passed a bill that would establish a religious test for migrants who want to become citizens, solidifying Prime Minister Narendra Modi’s Hindu-nationalist agenda.”
Then it goes on to say: “Muslim Indians are deeply unsettled. They see the new measure, called the Citizenship Amendment Bill, as the first step by the governing party to make second-class citizens of India’s 200 million Muslims, one of the largest Muslim populations in the world, and render many of them stateless.”

Use of words and phrases such as “marginalization”, “make second-class citizens” and “render many of them stateless” are grossly misleading, mischievous and untrue. There is absolutely NO clause in the said Bill that would in any way affect any Muslim citizen of India. The Bill relates only to minorities from three contiguous countries who may wish to seek citizenship.

The said article then goes on to try and confuse issues by talking about the NRC exercise in Assam, Jammu and Kashmir and the Ayodhya case.

It says: “The legislation goes hand in hand with a contentious program that began in the northeastern state of Assam this year, in which all 33 million residents of the state had to prove, with documentary evidence, that they or their ancestors were Indian citizens. Approximately two million people — many of them Muslims, and many of them lifelong residents of India — were left off the state’s citizenship rolls after that exercise.”

Assam is one of the states that have suffered continuous influx of illegal migrants from neighbor countries. The authors themselves admit that “all 33 million residents of the state had to prove, with documentary evidence, that they or their ancestors were Indian citizens.” Malicious intent of the article becomes evident when they fail to make it clear that when you’re talking about “all 33 million residents” of the state, it includes Hindus too. Which means all Hindu residents too had to undergo this exercise in Assam.

Then it says: “the legislation would also make it easier to incarcerate and deport Muslim residents, even those whose families have been in India for generations, if they cannot produce proof of citizenship.” This is a BLATANT LIE. The citizenship amendment bill has nothing to do with any citizen of India. It only pertains to those who wish to seek India’s citizenship.

No Indian citizen will be asked to produce any document to prove citizenship after the CAB is passed, it is purely false propaganda.
The next para in the article is a bunch of sweeping statements, not substantiated with any data or proof. It says: “Under Mr. Modi’s leadership, anti-Muslim sentiment has become blatantly more mainstream and public. Intimidation and attacks against Muslim communities have increased in recent years. And overt displays of Hindu piety and nationalism have become central in pop culture and politics.”

It is clear that the intent behind this article is political, divisive and malicious. It’s a sorry state of affairs when internationally trusted journalistic platforms such as NYT give space to such agenda-ridden content.

The government of India has made its position very clear. The Ministry of External Affairs has released an official statement saying:
“The CAB does not affect the existing avenues available to all communities interested in seeking citizenship from doing so. The recent record of granting such citizenship would bear out the Government of India’s objectivity in that regard.

“Neither the CAB nor the National Register of Citizens (NRC) process seeks to strip citizenship from any Indian citizen of any faith. Suggestions to that effect are motivated and unjustified. Every nation, including the United States, has the right to enumerate and validate its citizenry, and to exercise this prerogative through various policies.”

The Citizenship Amendment Bill 2019 (popularly referred by its abbreviation: CAB) seeks to amend the Citizenship Act 1955 to add the proviso that “any person belonging to Hindu, Sikh, Buddhist, Jain, Parsi or Christian community from Afghanistan, Bangladesh or Pakistan, who entered into India on or before the 31st day of December, 2014 and who has been exempted by the Central Government by or under clause (c) of sub-section (2) of section 3 of the Passport (Entry into India) Act, 1920 or from the application of the provisions of the Foreigners Act, 1946 or any rule or order made thereunder, shall not be treated as illegal migrant".
The Bill elaborates:

Subject to fulfilment of the conditions specified in section 5 or the qualifications for naturalisation under the provisions of the Third Schedule, a person granted the certificate of registration or certificate of naturalisation under sub-section (1) shall be deemed to be a citizen of India from the date of his entry into India.
On and from the date of commencement of the Citizenship (Amendment) Act, 2019, any proceeding pending against a person under this section in respect of illegal migration or citizenship shall stand abated on conferment of citizenship to him:

In the Third Schedule to the principal Act (Citizenship Act 1955), in clause (d), the following proviso shall be inserted, namely:—
‘Provided that for the person belonging to Hindu, Sikh, Buddhist, Jain, Parsi or Christian community in Afghanistan, Bangladesh or Pakistan, the aggregate period of residence or service of Government in India as required under this clause shall be read as "not less than five years" in place of "not less than eleven years".’

The Citizenship amendment law cannot take away anyone’s citizenship. It can only give citizenship to religious minorities from Pakistan, Bangladesh and Afghanistan.

CAB has nothing to do with citizens of India – Muslim or otherwise. It seeks to grant citizenship to persecuted minorities, from three specified countries, who came into India on or before May 2014.

CAB lists six persecuted minorities who can benefit from this law - people belonging to Hindu, Jain, Buddhist, Sikh, Parsi or Christian.
6 communities from 3 countries have been given relaxation, for everyone else the normal naturalisation law remains applicable.

The amendment does not cancel the existing naturalisation laws.

CAB does not deal with the deportation of illegal immigrants.

It does not give automatic citizenship to Hindus. They must have lived in India for at least five years before they can even apply for citizenship. It is not particularly biased in favour of Hindus as many are arguing.