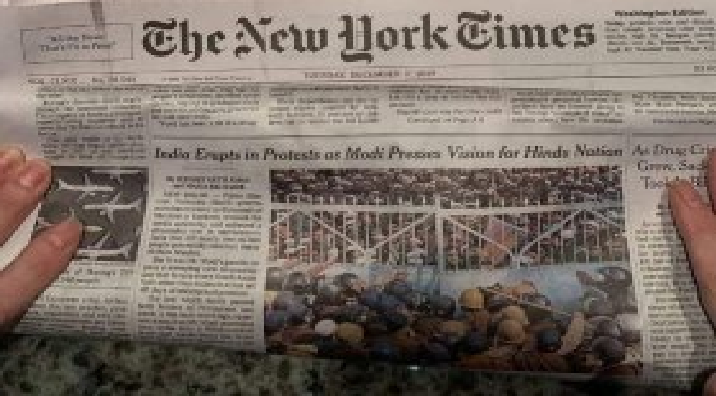 Several international publications have described the violence in Delhi over the Citizenship Amendment Act (CAA) as an act of religious hostility. Nothing could be farther from the truth.

Describing violence in a part of Delhi as an act of religious hostility between two communities is nothing but journalistic adventurism that some western media outlets seem to have indulged in.
Here is a point-wise rebuttal of the distortion, and the incorrect and misleading information, in some of the reports:

‘Muslims are fleeing Delhi’
The New York Times, in its article on the violence in Delhi on February 27, said,“Muslims in New Delhi are fleeing as sectarian violence reduces their houses, shops, and places of worship to ashes.”

Rebuttal
Where did The New York Times get this information from? This seems to be based more on hearsay than facts. There have been no reports of members of the Muslim community fleeing Delhi. Incidents of arson and vandalism took place in the northeastern part of India’s national capital Delhi, but it was not only against Muslims but Hindus too.

‘CAA is anti-Muslim’
The New Yorker in an article published on February 28 on the Delhi mob violence said: “At the centre of the conflict is the Citizenship Amendment Act (CAA), a law passed by Prime Minister Narendra Modi’s Hindu majoritarian government that creates a path to citizenship for immigrants of different faiths - unless they happen to be Muslim. Its passage sparked demonstrations across the country, many of which have been met by force from police and right-wing groups.”

Rebuttal
A false narrative has been created over CAA that it is anti-Muslim in its character and that those who don’t have valid residential documents will be put in detention centres or thrown out of the country. India’s Prime Minister Narendra Modi and Union Home Minister Amit Shah have repeatedly said that this law is meant to give citizenship to persecuted Hindus, Sikhs, Jains, Buddhists and Christians from Pakistan, Bangladesh and Afghanistan. They have also made it clear that the CAA doesn’t have any provision of taking away citizenship of Indian nationals, including Muslims.

‘Delhi Police seemed to side with the mobs’
In a news article published in the New Yorker on February 27, the US-based media outlet said: “Since Sunday, mobs had been destroying the shops and homes of Muslims, vandalizing mosques, and assaulting Muslims on the streets. In their chants of “Jai Shri Ram,” praising a Hindu deity, their loyalties were clear. The attackers were Hindu nationalists, part of a right wing that has been empowered by Prime Minister Narendra Modi’s government; many of them were even members of his party. The Delhi police, who are supervised by Modi’s home minister, seemed to side with the mobs”

Rebuttal
All those who have indulged in arson and violence in Delhi are being identified and they will be prosecuted according to Indian laws. Delhi Police has filed over 120 cases against those who were part of this. If the Delhi Police was siding with the mobs attacking and vandalising Muslim properties, they would not have initiated these cases against the arsonists.