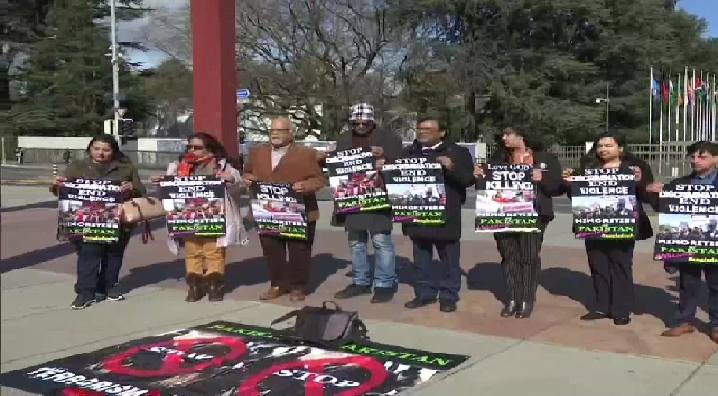 By raising false charges against India, Pakistan is trying to deflect criticism about the situation in its own country

Pakistan has been making repeated attempts to paint a distorted picture of the situation in Jammu and Kashmir during the 43rd session of the United Nations Human Rights Council (UNHRC) being held in Geneva, Switzerland.

Pakistan has alleged that India is violating human rights in Jammu and Kashmir; it has also sought a rollback of the abrogation of Article 370 and the change in its status to a Union Territory.

Pakistan on the back foot
By raising these charges against India, Pakistan is trying to deflect criticism about the human rights situation in its own country and its support to terrorism in Jammu and Kashmir.

This has also been raised by experts on international relations from many countries who have rejected Pakistan’s allegations about Jammu and Kashmir outright.

Pakistan had issues with India because it was not a secular democratic state with the same kind of diverse constitution and diverse ethnicity which India had, media reports quoted former European Commission Director Brian Toll as saying. He also pointed to Pakistan’s support of terrorism in Jammu and Kashmir, while speaking at an event, "Weaponising Kashmir: Misused Kashmir for its political agenda", on the sidelines of the UNHRC session on March 2.

Speaking at the same event, Executive Director of the Brussels-based South Asia Democratic Forum raised the issue of Pakistan “unlawfully” occupying a big part of Jammu and Kashmir since 1947.

Member of European Parliament Gianna Gancia chose to focus on the deteriorating human rights situation in Pakistan. This was particularly true of members of the minority communities, she said while speaking at another event held on the sidelines of the UNHRC session. The Citizenship Amendment Act (CAA) introduced by India would help members of such persecuted minority communities, she said.

Anti-Pakistan protests by Baloch, Pashtun activists
Events and campaigns organised in Geneva to coincide with the UNHRC session have further embarrassed Pakistan. On March 4, Baloch activists put up banners seeking UNHRC intervention to stop ‘the genocide’ in Pakistan.

Activists at a demonstration organised by the Baloch Voice Association held up posters with slogans like ‘Balochistan is bleeding’, ‘Free Balochistan’ and ‘Stop enforced disturbances’.

Pashtun activists held a separate demonstration, protesting against what they claimed was the Pakistan Army’s genocide in the Khyber Pakhtunkhwa region of Pakistan. These demonstrations only served to underscore the situation within Pakistan at a time when its leaders were trying to mislead the world on Jammu and Kashmir.

India has rejected Pakistan’s charges
On February 25, Pakistan’s Minister for Human Rights Shireen Mazari alleged that India was violating the human rights of the Kashmiri people. She also sought the repeal of all the actions taken by India on August 5, 2019 (when Article 370 was scrapped and Jammu and Kashmir was made a Union Territory).

“India’s unilateral actions of 5th August 2019, aimed at altering the demographics of Occupied Jammu & Kashmir, are illegal under international law and constitute a willful violation of several UN Security Council Resolutions,” she said.

India’s response was prompt, and precise. Jammu and Kashmir “was, is and shall forever” remain an integral part of India, Secretary (West) Ministry of External Affairs Vikas Swarup said in response to Pakistan’s latest attempt to internationalise Jammu and Kashmir.

The response is based on the core principles of the Simla Agreement signed on July 12, 1972. Under this agreement, India and Pakistan resolved to settle their differences “by peaceful means through bilateral negotiations or by any other peaceful means mutually agreed upon between them”.

The sooner that Pakistan remembers this agreement, the better.