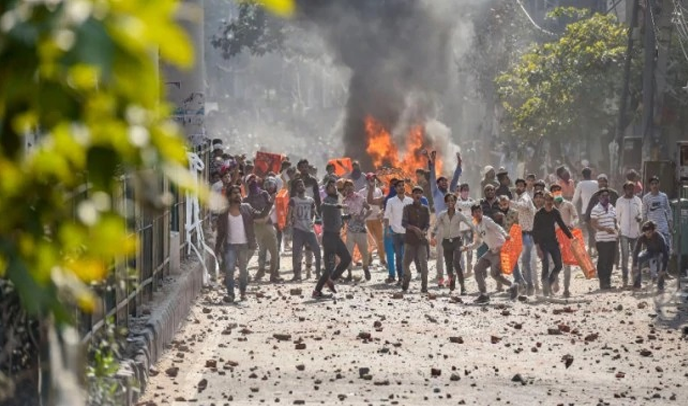 File photo of the violence in Delhi. (Source: DD News)

A fact-finding report by an independent body rejects charges of action against students, members of the Muslim community

There is no communal bias in the arrests made in connection with the cases of Delhi violence in February this year, a fact-finding report by an independent body, the Group of Intellectuals and Academicians, has said.

The report has also referred to data shared by the Delhi Police on public platforms that “repeatedly indicates that there is no communal bias in the arrests made in the case of Delhi Riots 2020”. Stating that approximately 1,300 persons had been arrested or were being probed in 750 cases, the report noted that “the numbers of those arrested are roughly equal”.

The premise that students are being targeted and arrested in these cases is also misleading, the report maintains.

“The total number of arrests is approximately 1300, out of which 15 are being discussed as student activists and out of these too 5 are students,” the GIA report on the violence in states.

The 20-page fact-finding report compiled by the GIA provides details of the cases registered against 15 persons who have been arrested or are being probed and may qualify as students or activists.

Getting into the nature of cases filed against these 15, the report points out that 8 have been charged under the Unlawful Activities Prevention Act (UAPA) which is usually invoked when the investigations point to serious offences.

According to the group, a fact-finding team examined information available in the public domain to uncover facts in cases related to the Delhi Riots 2020 in response to the discourse that law enforcement is harassing students and activists in the Delhi Riots cases.


This is what the report concluded:

1.The discourse that students and activists are being arrested in the investigations into the Delhi Riots not supported by facts.

2.The narrative that only Muslims are being arrested and convicted for the violence in the Delhi Riots 2020 is again not supported by facts. For instance the Delhi Police opposed the bail of the accused in the cold blooded murder of 85 year old Akbari Begum.

3.The Delhi Police and law enforcement are working as per the law of the land to ensure speedy justice to all the victims of the riots that occurred in North East Delhi in February 2020.

4.The repeated attempts to create a discourse that “students” and “activists” are being targeted and specific communities targeted in the riots is a false narrative that does not stand up to the scrutiny of hard facts.

In its preface, the report points to statements that the State and its law-enforcement agencies were engaging in “a witch hunt” by arresting students and activists. “Further the impression is being carried that only Muslims are being arrested and victimized under provisions of law in cases related to the Delhi Riots 2020,” it says.

At least 53 people were killed and over 500 injured in north-east Delhi as a result of violence on February 24 and 25.

Click here to read the complete report by GIA

Group of Intellectuals and Academicians