Why the Baloch feel alienated being a part of Pakistan 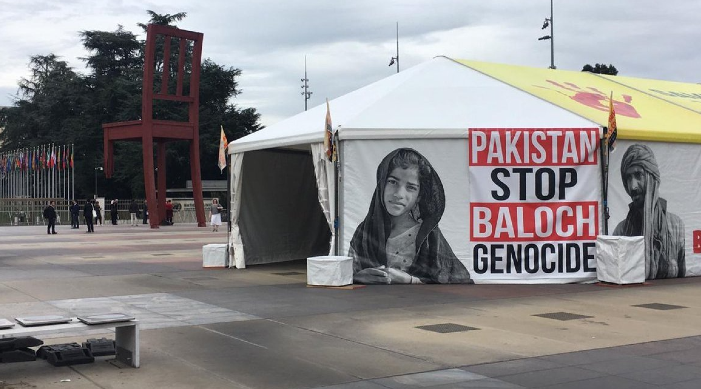 File photo of a protest by Baloch activists in Geneva in 2019. (Source: Baloch Human Rights Council)

Munir Mengal, a Baloch nationalist hounded out of his land, was once training to become an officer of the Pakistan Army. As part of his course at the military college, he was asked to pray five times a day. A violation of the rule invited severe punishment.

“I couldn’t agree to it,” Mengal said while talking to this reporter recently. Hailing from Balochistan, Mengal was raised with a belief that religion is a personal matter of each individual and his sacred relation with God. “Baloch are not comfortable making a statement of their religion to impress others,” he pointed out. Besides, he felt miserable to see many Zikri (a non-Islamic Baloch tribe) recruits being forced to say Namaz five times a day in violation of their belief.

His rebellion started from the military college where the system was trying to convert Mengal from a secular Baloch to a ‘true’ Pakistani.

One day when it was cloudy, he decided against going for Namaz. He was summoned by the instructor at the Cadet College, Mushtung. The officer asked him why he didn’t say his prayers. A teenager Munir asked the officer for whom he was praying. The officer said, “It’s for Allah.”

Mengal was in a foul mood. He answered back to his instructor: “Then Let Allah question me.” The enraged officer beat him black and blues in front of some 360 cadets, all training to be officers in the Pakistan Army.

The mixing of religion and nationalism put Mengal off a military career and he did accounting and engineering. And after being jailed by the government for his anti-Pakistan activities for seven months, Mengal quietly left Pakistan and took refuge in Geneva where he heads the Baloch Voice Association and campaigns for the rights of the Baloch people and an independent Balochistan.

Mengal and many other leaders of Balochistan who live in exile in European countries rue lack of actual support from India. Mengal said he was once invited by a Delhi-based think tank to speak. Just hours before he was to speak, he was told that his lecture had been cancelled.

Forget about helping the Baloch rebels, India refused to give a visa to the slain Nawab Bugti’s grandson and even didn’t roll out a red carpet for Professor Nayla Qadiri Baloch, another leader living in Canada in exile who was here soon after Prime Minister Narendra Modi making his famous independence day speech mentioning India’s support for people of Balochistan and Gilgit-Baltistan.

For these reasons, Islamabad’s claims that India is behind violence in Balochistan is a fallacious narrative created to draw parallels between the freedom struggle of the Baloch people and Pakistan’s role in waging a proxy war- cum-jihad in Kashmir for three decades.

Comparison between the struggle of the Baloch people against Pakistani occupied forces and Islamic terrorism in Kashmir, a generic name for the state of Jammu and Kashmir since bifurcated into two Union Territories (UTs), is therefore blatantly wrong. Kashmir became part of India after its sovereign ruler signed a legal instrument of accession with Delhi in October 1947.

As against this Balochistan, an independent State till March 1948 was subsumed through an armed invasion and subterfuge as a province of Pakistan.

History has it that Balochistan was never part of British India to be given to Pakistan as part of the deal for the partition of India. Mengal says Baloch are quite different from Pakistanis in terms of their traditions, religious beliefs and a sense of freedom.

Vagaries of time saw the territory of Baloch people coming under Iran and Afghanistan before the independence of India. In 1948, a week before the freedom was to be given and the British would leave, the Khan of Kalat, in his capacity as a Sovereign ruler signed a standstill agreement with the future state of Pakistan.

Under it, Pakistan accepted Balochistan as an independent country.

However, soon after its formation, the Pakistani rulers began eying the immense mineral and the natural gas deposits of Kalat. They asked the ruler to merge his country into the just born Pakistan.

The elected bodies of Kalat rejected Pakistan’s overtures forcing Islamabad to send its army to take control and make the Khan of Kalat sign instrument of accession seven months after the formation of Pakistan.

This is unlike Kashmir where Maharaja Hari Singh had asked for India’s help against a Pakistani attack during the standstill agreement stage. Since the Indian Military would not fight for others Hari Singh agreed to accede J&K to India in October 1947. The accession was endorsed by the Constituent Assembly of J&K.

Islamabad began the exploitation of natural resources of Balochistan – mines of copper, gold, natural gas, called Sui gas after the place of its origin – for the rest of Pakistan, keeping the province backwards and underdeveloped. Now with China-Pakistan Economic Corridor ending at Gwadar port of Balochistan, the gold mine at Sandak has been leased out to the Chinese companies.

In comparison India has invested heavily in Kashmir’s progress and growth, the latest one being the railway line up to Kashmir, an ambitious project that will end the frequent breakdown in surface transport line to Kashmir. Besides, the present highway is also being widened to increase connectivity between Kashmir and the rest of the country.

Islamabad keeps harping on former Naval officer Kulbhushan Jadhav’s alleged role as evidence of India’s involvement in fuelling anti-Pakistan violence in Balochistan while in reality Pakistan’s had open involvement in creating and sustaining terrorism in Kashmir. Not only had it been training Kashmiri youth in terror and sabotage activities, but Islamabad had also been sending its youth to Kashmir to wage jihad. Terrorist groups like Lashkar-e-taiba (LeT), Jaish-e-Mohammad (JeM) and even Hizbul Mujahideen (HM) have their headquarters in Pakistan.

According to Mengal, Pakistan’s deep state has been trying hard to radicalise Baloch youth and involve them into jihad in Kashmir. Once LeT chief and mastermind of Mumbai terror blasts Hafiz Saeed visited Balochistan to recruit the youth into jihad in Kashmir. He was sent back as people could not follow what he was saying.

Besides, the imposition of Urdu as a national language has evoked strong reactions from the Baloch people who have their distinct language. As against this, Jammu and Kashmir had seven official languages and All India Radio stations broadcast in these.

According to a report of the Baloch Human Rights Council, at least 308 Baloch people have gone missing in Balochistan after army actions against rebels and their families between 2011 and 2018. The report was presented to world human rights bodies including the UN Human Rights Council.

Mengal has exposed Pakistan Army for using the arrested Baloch women as sex slaves to trap political prisoners. The Human Rights bodies and Reporters sans Frontieres have documented Mengal’s account of a Baloch woman who he met in military prison on this.

The journalists who write on the atrocities of the Pakistan Army on Baloch people are hounded routinely and many leave the country. Recently, Baloch journalist Sajjad Hussain, living in exile, was found dead a month after he had gone missing in Sweden. The International Federation of Journalists said the death appeared to be related to his work. He had highlighted the cause of the Missing Baloch freedom fighters.

(The writer is a senior journalist who analyses Kashmir affairs and India-Pakistan relations.)