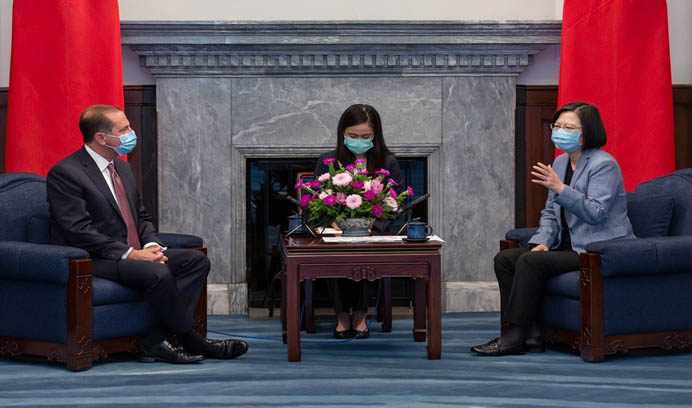 It was the first official visit in decades by a US official to Taiwan, an independent state considered a breakaway territory by China. The recent visit has raised many eyebrows, and this increased proximity between the US and Taiwan has certainly angered China.

Tweeting after landing on August 9, Azar said, “Honored to be here to convey our support for #Taiwan and their global health leadership”.

Wheels down in Taipei. Our @HHSGov delegation disembarked wearing masks and tested negative for COVID-19.

Honored to be here to convey our support for #Taiwan and their global health leadership. pic.twitter.com/Kwqh2uefhc

According to several media reports, US came late but came with an agenda. Azar who landed in Taiwan on August 9 said that he came with three central schemes. The first one was to recognise Taiwan as an open democratic society. He said that Taiwan has worked very well in its fight against COVID-19. The second is to reaffirm Taiwan as a long partner and friend of the United States and the third was to make sure that Taiwan deserves to be recognised as a global health leader with an excellent track record of contributing to international health.

US Health Secretary Alex Azar not only met the President but also met several health officials as well as the Foreign Minister of Taiwan.

In a tweet, he said, “The US and Taiwan share the belief that free and open societies are best equipped to combat infectious disease threats.”

Speaking with journalists across the Indo-Pacific region this morning about our visit to #Taiwan. The US and Taiwan share the belief that free and open societies are best equipped to combat infectious disease threats. @eAsiaMediaHub pic.twitter.com/nrU6YC7bqM

Many in the US saw the move as a bolster to relations between Taiwan and the US.

Glenn Grothman, a member of US house of Representatives also took to twitter to share his thoughts. He said that Azar’s visit marks a milestone in friendship between the two nations.

.@SecAzar’s visit marks an important milestone in our friendship with #Taiwan. I strongly support independence for Taiwan and it’s 23 million residents and hope for peace and stability in the Asia Pacific region.https://t.co/B7wqfjiuUv

Another representative Barry Loudermilk also hailed the friendship between the two.

Similarly, the US Senate Foreign Relations Committee wrote, “The U.S. and Taiwan have many shared interests, including a commitment to public health”.

I am glad @SecAzar visited #Taiwan and shared our strong and ongoing support with @iingwen. The U.S. and Taiwan have many shared interests, including a commitment to public health. We are grateful for their partnership. #TaiwanModel https://t.co/PypxqE7twU

Azar’s visit was duly celebrated by the Taiwanese side as well. Taiwan’s Ministry of Foreign Affairs congratulated Taiwan’s government for boosting ties with the US.

According to several reports, China had last week opposed Azar’s visit to Taiwan. A Chinese foreign ministry spokesperson had said, “China firmly opposes any official interactions between the US and Taiwan.

The increasing proximity between the two nations has undoubtedly created a stir on the Chinese side. While some saw it as another stain in the US-China relations, many also related the recent arrest of businessman Jimmi Lai Apple from Hong Kong to the closeness between Taiwan and the US.

US Secretary of State Mike Pompeo condemned the arrest as China’s another attempt to erode Hong Kong’s freedom.

According to several media reports, China sees Taiwan as a bone of contention in its strained relationship between the US and China and now the closeness between the two has certainly irritated China.