India can do much for world peace and development: Ban Ki-moon 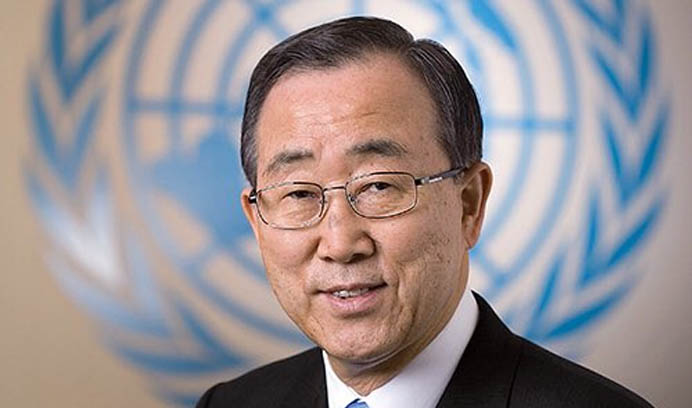 India can overcome the COVID-19 crisis with Prime Minister Narendra Modi mobilising full and all resources, Former Secretary General of the United Nations (UN), Ban Ki-moon has said while expressing concerns over the growing number of confirmed cases in the country.

Responding to a question from India News Network on the role of India in handling COVID-19 crisis within the country and abroad during a virtual conference today, he said, “I hope that the situation will be contained as quickly as possible with PM Modi mobilising full and all resources.”

Showing concern over the increasing number of cases in the country, he advised the government and the citizens to work together in solidarity with united hearts and minds to fight the pandemic.

Ban Ki-moon cheered the fact that India is moving ahead in the strata and status to influence the global scenario. He said, “India is one of the fastest growing countries and can do much for world peace and development.”

Addressing ‘The UN at 75’ conference organised on September 17 by the Foreign Correspondents Club of South Asia to mark 75 years of UN, Ban Ki-moon called India as one of the biggest contributing countries around the world working endlessly towards the peacekeeping operations of the UN and hailed the long legacy of the Indian subcontinent to provide assistance whenever needed in several parts of the world.

“India is one of the big contributing countries in the world.” Not just that, “during the Korean war of 1950s, 16 Parachute Field Ambulances of the Indian Army were sent to provide medical support to Koreans,” he said.

India has deployed more than 2,00,000 Indian troops in 49 of 71 peacekeeping operations of the UN, he said further.

The video conference on ‘Is the World Better or Worse,’ was organised to address and ponder upon some of the pertaining issues which have refused to die down even after the 75 years of the UN's establishment. The other keynote speakers included India’s former Permanent Representative to the UN Syed Akbaruddin, India’s former Permanent Delegate to UNESCO, Bhaswati Mukherjee and former Chef the Cabinet to UN Secretary General, Vijay Nambiar.

The former UN Secretary General called the COVID-19 pandemic, a wakeup call for the world and the UN. Ban Ki-moon said, “COVID-19 has shown light upon the limitations of multilateralism and international governance.”

Addressing the video conference, the former Secretary General of UN said, “To design a new sustainable future, a paradigm shift in strategic thinking and the according practices are desperately needed. Indeed COVID-19 is expected of leaving a more appalling impact on Global Society.”

Saying that the UN has experienced monopoly in the past few years especially in the UN Security Council where the power is restricted in the hands of some powerful countries, Ban Ki-moon marked a greater role for India for bringing this paradigm shift in the world.

“Security Council reform is so delicate, so complicated because it’s not only expansion of a membership but also it has something to do with Veto power and regional representations and working methods of the security council.” Some powerful nations will not like any reforms since they have a monopoly, he said.

He said that non-permanent members of UNSC have no Veto power on any of the decisions of the council. “India can attack and criticise this kind of point. It is a very unreasonable point.”

“It has been a long aspiration of India and other G4 countries. Germany, Japan, Brazil and India are recognised for their contributions in UN principles and charters,” he said.

It is not the first time that India has changed something in the UN. India’s Former Permanent Delegate to UNESCO, and another keynote speaker, Bhaswati Mukherjee recalled her time when she served as the Indian Ambassador to Netherlands to highlight changes that India can bring to the world order.

She said, “It was during Syed Akbaruddin’s time in UN that we achieved something virtually impossible. We changed the ‘so-called’ P5 structure of the International Court of Justice (ICJ).” “When India took on the challenge and defeated the United Kingdom and its sitting judge and we got elected, it was the first time that a P5 member had been defeated,” she said.

Interestingly, India, on September 15 won a seat in the United Nations Commission on the Status of Women (UNCSW) by beating China and Afghanistan which demonstrates the fact that India is moving ahead in its endeavours of becoming an influential country in the world.

The UN is currently celebrating its 75 years of establishment. The year 2020 is a special anniversary year as it marks 75 years from the signing of the UN Charter in San Francisco in 1945. After World War 2 had ended, the nations decided to form an organisation among themselves to work together towards peace and stability in the world.