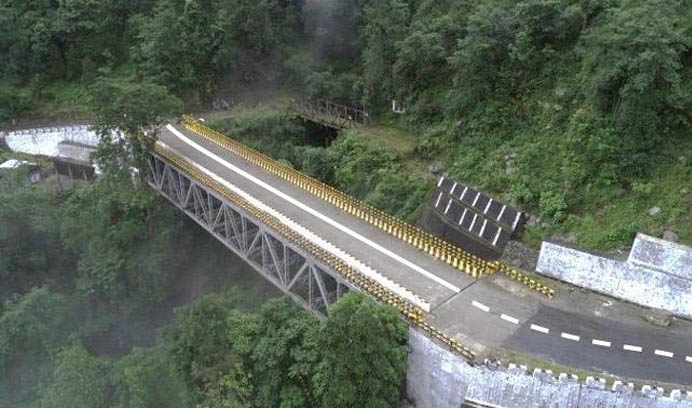 India opened 44 new bridges in the border areas on Monday.

With all its psychological, tactical and strategic warfare against India meeting a robust response from New Delhi, a desperate China has launched a frontal attack on its southern neighbour’s territorial integrity, while simultaneously denouncing its move to ramp up infrastructure in the border areas which is critical for the security of the nation.

He also said that his country, “opposes infrastructure building aimed at military contention in disputed areas. Based on the consensus reached by the two sides recently, neither side should take any action that might complicate the situation at the border region, so that bilateral efforts to ease tension will not be undermined”.

The Chinese Foreign Ministry spokesperson was reacting to the launch of 44 new strategic bridges and foundation stone laying for the highly strategic Nechiphu Tunnel in Arunachal Pradesh by Defence Minister Rajnath Singh on Monday.

Zhao Lijian said, “the Indian side has been stepping up infrastructure building and military deployment along the border with China. This is the root cause of tensions. We urge the Indian side to earnestly implement the consensus reached by the two sides, refrain from taking actions that will complicate the situation, and take concrete measures to safeguard peace and tranquility along the border”.

Writing an article for April 2014-June 2014 edition of USI (United Service Institution of India) journal, Colonel Kulbhushan Bhardwaj had said, “In the 21st Century, wars will be won not merely on the fighting prowess of the armies on the battlefield but also on the infrastructural capability of the two antagonists in the area of operations. Thus, having a strong force capability is an essential element in winning wars.”

China, the fire-spitting dragon that doesn’t believe in coexistence with India, has not only well developed metalled roads and highways right up to its border posts along the 3488-km Line of Actual Control, it has 15 airfields in and around the Tibetan Autonomous Region. Besides, 10 more new airfields are being developed in the area.

Ironically, despite rapid infrastructural development by China along the border areas, India till over a decade ago stubbornly went into denial mode in making the country’s western and eastern fronts strong by building roads or laying bridges.

The Indian leadership was of the view that the more rugged and poor the border area remains, the more difficult it would be for the Chinese army to intrude into the country’s territory, even as they were quite aware of the fact that the PLA with the help of improved infrastructure on the Chinese side of the LAC could flood troops from its military bases in quick time. China was happy with this decadent perception of India over border infrastructure development as that meant slower movement of the Indian troops even during conflict time. But rules of the game changed sharply, when India started giving a push to border development.

Of these 44 bridges launched by Rajnath Singh on October 12, at least 30 are on routes leading to the LAC with China. Eight of these 44 bridges have come up in Ladakh alone. Many of these are ‘Class 70’ bridges which allow the movement of heavy military trucks, tanks and armoured personnel carriers of the Army.

The Chinese Foreign Ministry spokesperson categorically blamed such stepping up of infrastructure build up along the LAC as “the root cause of tensions,” in the Eastern Ladakh. This speaks volumes of China’s discomfiture. India has given a big jolt to Beijing’s intention to grab territory that belongs to the country. For China, the policy of might is right is under strain as India is continuing to beef up infrastructure by building strategically important tunnels, bridges and roads and laying rail lines up to the border.

Last week, writing in Global Times, China’s lone English daily, Song Zhongping, a Chinese military expert heaped scorn on India for inaugurating the 9.2-km Atal Tunnel, the world’s longest all-weather tunnel. Speaking about it, the Chinese military expert said, “the tunnel will be of great help to Indian troops and their provision of supplies in peacetime; however, it has no benefit in wartime, especially if military conflict breaks out. The Chinese People's Liberation Army has means to make this tunnel unserviceable”.

He further added, “It is better for China and India to coexist peacefully with each other. India should restrain itself and refrain from provocation as no passage exists that can enhance India's combat capability. After all, there is a certain gap in combat effectiveness between China and India, especially in terms of India's systematic combat capability. India is far from reaching China's level.”

Clearly, China has no other option but to vent its frustration; India has given a blow to its ambition to become global power and the countdown for its decline has begun.