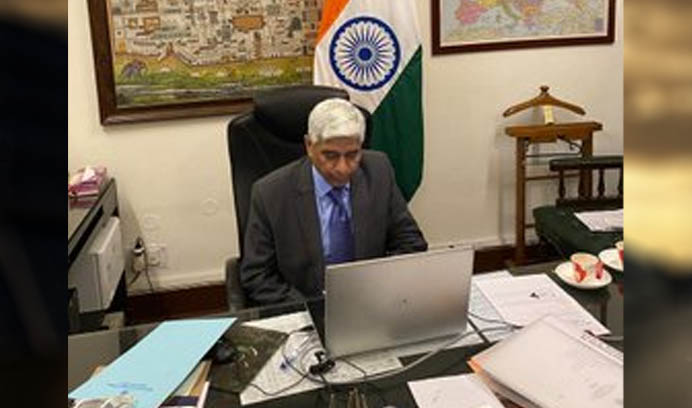 Without taking any name, India on Wednesday hit out at Pakistan for misusing Commonwealth foreign ministers’ virtual meeting for raising issues such as Kashmir, saying a “globally acknowledged promoter of state sponsored terrorism” masquerades as an alleged victim of the menace.

“When we heard them rant about a South Asian state, we were left wondering why it was describing itself? And not surprisingly it came from a globally acknowledged promoter of state sponsored terrorism masquerading as an alleged victim of the same,” Secretary West in the Ministry of External Affairs Vikas Swarup who attended Commonwealth foreign ministers’ meeting on behalf of External Affairs Minister S Jaishankar, said.

“This is also the same country that has the dubious distinction of becoming synonymous with the phrase “epicenter of terrorism” and hosting the largest number of terrorists proscribed by the United Nations,” Vikas Swarup further said, adding the only dispute left in what it alleged today as a “disputed territory” is its own illegal occupation of certain parts, which sooner or later, it would have to vacate.

In his speech, Pakistan’s foreign minister Shah Mahmood Qureshi said, “While the world remains preoccupied with pandemic, a state in South Asia is targeting its religious minority groups in order to foment division and hatred amongst community groups. It has transgressed rights and freedoms of millions and fanned hyper nationalism to engineer illegal demographic change in a disputed territory and sowed racial tensions.”

Reacting to the Pakistan Foreign Minister’s statement, the Secretary East said, “We heard it from a country that brought genocide to South Asia, 49 years back when it killed its own people,”

Expressing unhappiness over misuse of Commonwealth meeting, he said, “It was unfortunate that today’s Commonwealth Meeting was misused by one of our south Asian member state to pursue its own bigoted, ill-conceived, narrow and unilateral agenda on a multilateral platform,” the Secretary West said.

“For such a country to hypocritically preach about religious minority groups elsewhere, while trampling itself upon the rights of its own indigenous minorities, was indeed most regrettable, and a blatant misuse of this august platform,” he added.