As protests mount, Pak PM Imran Khan stares at a winter of discontent 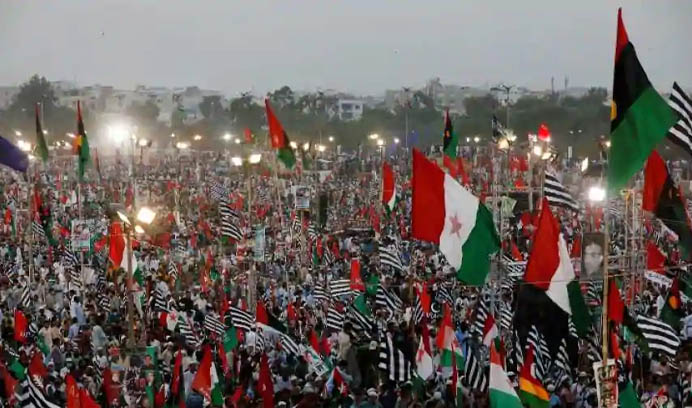 On August 18, 2018, Imran Khan was sworn-in as the Prime Minister of Pakistan. Inheriting a mounting economic crisis, widespread corruption and growing unemployment, he had vowed to create a ‘New Pakistan.’ Twenty six months after becoming the 22nd Prime Minister, the cricketer-turned-politician is wallowing in huge public antipathy and rivals’ disdain.

The Pakistan Army which is accused of co-opting Imran Khan in becoming the Prime Minister is also under merciless attack from the opposition parties as they hold it responsible for the ills the country is afflicted with.

At the two back-to-back joint opposition rallies held in Gujranwala in Pakistan’s Punjab province (on October 16) and Karachi (on October 18), Imran Khan was ripped apart for his government’s economic mismanagement, double digit inflation, corruption, power cuts, closure of businesses and difficulties faced by common people in their day-to-day life.

Asking for his resignation, four opposition parties - Pakistan Muslim League (N), Pakistan People’s Party (PPP), Jamiat Ulema-e-Islam (Fazlur) and Pakhtunkhwa Milli Awami - are planning for more protest marches against the incumbent government. Significantly, the four opposition parties’ alliance is running an anti-Imran movement under the banner of Pakistan Democratic Movement, which inter-alia serves a message to the people that the country’s democratic polity is under the Army’s control.

The PDM openly says that Imran Khan is not an elected Prime Minister, rather he has been “selected” by the Pakistan Army with defecting lawmakers from PML (N) and PPP. It is unprecedented in Pakistan’s history that political parties of the country are directly attacking the Army for its role in making democracy a butt of jokes in Pakistan. Former Prime Minister Nawaz Sharif is, in particular, acerbic in his comments against the Pakistan Army and General Qamar Jawed Bajwa.

Launching a frontal attack on the Pakistan Army in his address to a conference of opposition parties in Islamabad from London via video conference, Nawaz Sharif last month lamented that the sanctity of people’s vote has always been trampled upon by the Pakistan Army.

In Pakistan’s history, he said, not a single Prime Minister has been allowed to complete a five-year term. He said the Pakistan Army ran a parallel government which was more powerful than the democratically elected government.

“By chance, if a representative of the people is elected, then he is first made powerless and then ousted. In the 73-year-old history of Pakistan, not a single PM was allowed to complete his full terms. On an average, every dictator ruled for 9 years while every PM could stay in office only for two years on an average,” Sharif maintained in his speech at the opposition parties’ conference on September 20.

In his second speech, which he made at a gathering in Gujranwala on October 16, the former Prime Minister was more direct and aggressive against Pakistan Army Chief General Qamar Javed Bajwa. He accused the Army and in particular Gen Bajwa of ousting him and the judiciary of colluding in his outer game, saying the Pakistan Army had become “a state above a state.” Taking on the Army is unprecedented in Pakistan, but Nawaz Sharif who belongs to the country’s Punjab province and has a sizable following, has shown that he has the guts to challenge the country’s most powerful institution.

In fact, by conducting rallies against the political and military establishments, stakeholders of the Pakistan Democratic Movement have revealed that they are committed to take their fight to a logical end. While removal of Imran Khan from the country’s prime ministerial chair is the main goal of the PDM leaders, they are also keen to see that the Pakistan Army doesn’t provide a protective shield around the Pakistan Tehreek-e-Insaf (PTI) chief.

All this is happening at the time when the Imran Khan government is riven by internal dissensions. Senior government ministers are openly accusing their colleagues in the cabinet of conspiracy, breach of trust and backstabbing. Federal Minister for Science and Technology Fawad Chaudhary pried open a can of worms on the Imran Khan-led government, when he, in an interview with Voice of America recently, talked about internal differences within the PTI and accused senior leaders of conspiring to remove each other.

He spoke about how senior PTI leader Jahangir Tareen hatched plans to remove minister Asad Umar from the federal government, while the latter was himself working behind the scene for the removal of Tareen from the post of general secretary of the party, considered to be a powerful post in the PTI. A motor mouth, Fawad Chaudhary didn’t stop at that only. He said the Pakistani people had high expectations from Imran Khan and the PTI, but the federal government failed miserably to make the system more professional and autonomous through systematic reforms.

Even as Imran Khan could resolve growing conflict within his party, he suffered a massive jolt when Chief of the Balochistan National Party (BNP-M) Sardar Akhtar Mengal left the government, accusing it of not keeping its promises on development of projects in Balochistan. Amidst such political upheavals and declining popularity, Imran Khan started placating the Army by placing several people from military backgrounds at higher posts in the government.

Lt General Asim Saleem Bajwa (Retd) was appointed as Communication Advisor of the Prime Minister and also the Chairman of the $60 billion China-Pakistan Economic Corridor (CPEC) in April this year. After reports of rise in his ill-gotten wealth and widening of the business empire surfaced, he recently quit from his post as a Communication Advisor, but he continues to be the Chairman of the CPEC project. This development has created a bad optics for the Imran Khan government even among those who are counted among his staunch supporters. They are especially peeved at the rise in military interference in issues like health, aviation, education, communication and economy—which are civilian in nature and need effective and professional handling to take the country out of the mess.

Inept handling of the Covid-19 triggered situation, failure to address the Paris-based Financial Action Task Force’s key mandates on money laundering and terror financing, closure of businesses, and lack of any concrete plan to bring the economy back to the rail—have made the Imran Khan government highly unpopular in Pakistan.

The country’s continued marginalization on the external front with traditional friends like Saudi Arabia and the UAE turning their backs on Islamabad--has hurt the people deeply. It is amidst such frustrating situations, the opposition parties have descended on the streets of Pakistan and their sole aim is to rid the country of the Imran Khan government.