2020, the year when India showcased its missile prowess 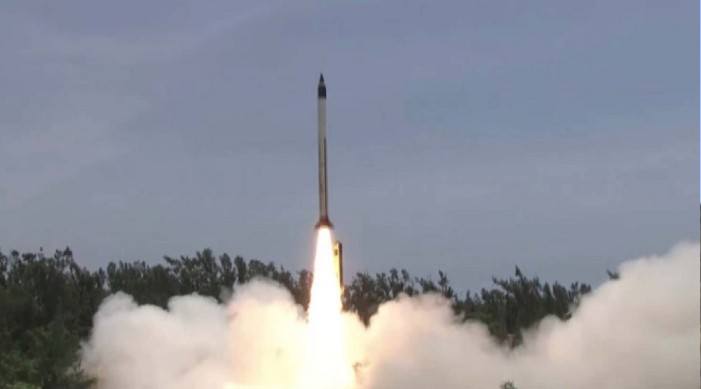 From a laser guided anti- tank guided missile to the Hypersonic Technology Demonstrator Vehicle (HSTDV), India showcased its missile prowess in the year 2020. In fact, for India’s defence forces, it would not be an exaggeration to call 2020 as the year of missiles, which provided a robust deterrent capability to its armed forces while sending a strong message to its neighbours challenging India’s territorial integrity.

India’s defence research establishment and armed forces flight tested dozens of missiles last year, sending a clear signal to all its adversaries to be wary of Indian retaliatory capabilities in case they try to test India’s resolve to defend its borders.

Last year, the Indian Air Force (IAF) successfully integrated the BrahMos air version supersonic missile on Su-30 MKI aircraft, giving it the capability to destroy any target within the range of 300 kms inside enemy territory.

The Brahmos missile provides IAF the much desired capability to strike from large standoff ranges on any target at sea or land with pinpoint accuracy by day or night and in all weather conditions.

Buoyed by successes in the indigenous development of various missile systems, the Defence Acquisition Council (DAC) of the Indian defence ministry accorded acceptance of necessity for procurement of many potential indigenous systems such as ASTRA air to air Beyond Visual Range (BVR) missile, capable of hitting enemy aerial target at a distance of over 100 kms.

Besides ASTRA, the process of procurement of Smart Anti-Field Weapon and Long Range Land Attack Cruise Missile (LR-LACM) has also been initiated. IAF is also in the process of upgrading its legacy surface to air Pechora system of post-1987 vintage.

In July 2020, the DRDO successfully conducted three flight tests of its indigenously developed Anti-Tank Guided Missile (ATGM) Dhruvastra from the integrated test range at Chandipur in Odisha. This is said to be one of the most advanced anti-tank missiles in the world.

Among the many advanced indigenous missile systems, the missile test which drew the world’s attention was the flight test of Hypersonic Technology Demonstrator Vehicle (HSTDV), which has the hypersonic air breathing scramjet technology. It was tested from the Dr APJ Abdul Kalam launch complex at Wheeler Island, off the coast of Odisha on September 7.

The Hypersonic Cruise Vehicle was launched using a proven solid rocket motor, which took it to an altitude of 30 kms, where the aerodynamic heat shields were separated at hypersonic Mach number. The hypersonic combustion sustained and the cruise vehicle continued on its desired flight path at a velocity of six times the speed of sound i.e. nearly two km per second for 20 seconds.

To enable Indian missile scientists to indigenously develop and flight test such systems, the Indian Defence Minister Rajnath Singh inaugurated an Advanced Hypersonic Wind Tunnel, making India the third country in the world after USA and Russia having such capability, though India was fourth to join the exclusive club of countries with a Hypersonic Missile program.

Located at a DRD0 complex in Hyderabad, the state-of-the art HWT Test facility is a pressure vacuum driven enclosed free jet facility having nozzle exit diameter of one meter and will simulate Mach No. 5 to 12. The facility will play a major role in the realization of highly complex futuristic aerospace and defence systems.

The DRDO achieved another milestone by successfully firing a Quick Reaction Surface to Air Missile (QRSAM) system. The missile launch took place from ITR Chandipur on November 13 off the Odisha Coast. All indigenous sub-systems were used in this missile, which directly hit a Banshee Pilotless target aircraft at medium range and medium altitude. Just four days later, the QRSAM, in another test, tracked another airborne target accurately and successfully neutralised it. This test was repeated on a high performance Jet Unmanned Aerial Target, which simulates an aircraft.

Another very advanced missile capable of destroying enemy radar systems called the Anti- Radiation Missile, named RUDRAM, was successfully flight tested on October 9, onto a radiation target located on Wheeler Island off the coast of Odisha. The missile was launched from a Su-30 MKI fighter aircraft as the launch platform, having the capability of varying ranges based on launch conditions. The RUDRAM will prove to be a potent weapon for the IAF for suppression of enemy air defence effectively from large stand-off ranges.

Another significant missile that will soon be added in the inventory of the Indian armed forces will play a devastating role in land warfare. This 3rd generation anti-tank guided missile NAG was tested on October 22 from the Pokhran range in Rajasthan. The missile was integrated with the actual warhead and a tank target was kept at designated range. This was launched from a NAG missile carrier NAMICA. The missile hit the target accurately, defeating the armor.

The Indian armed forces are already equipped with long range Intercontinental Ballistic Missile AGNI. But the testing of missiles by the Indian scientists last year assumes added significance in the backdrop of increased Chinese hostility and military aggressiveness on the Ladakh border. The newly acquired military capabilities will raise the morale of the Indian armed forces and deter the adversaries from launching a military attack on India.