Failing on all fronts, Pakistan blames India for every wrong on earth 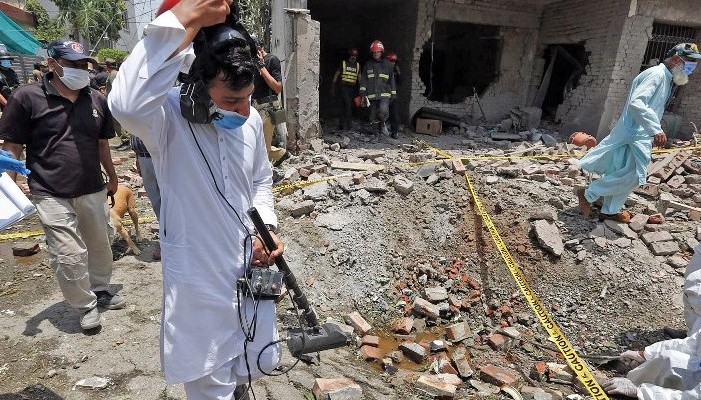 The IED explosion in Johar Town of Lahore, supposedly aimed at terrorist mastermind, Hafiz Saeed, was blamed on India. Pakistan National Security Advisor, Moeed Yusuf stated, “without a doubt I want to say, (the circumstances) of this entire attack leads to Indian-sponsored terrorism.” They also accused India of a series of cyberattacks which were carried out the same day in Pakistan. Yusuf stated, “We have no doubt that the Johar Town blast and cyber-attacks are linked.”

Imran Khan tweeted, “the planning and financing of this heinous terror attack has links to Indian sponsorship of terrorism against Pakistan.” Even Pakistan President Dr Arif Alvi joined the chorus accusing India. The common factor is that they all agree the target was Hafiz Saeed, who as per Pakistan’s FATF report was supposed to be undergoing a 15-year jail term in Lahore’s Kot Lakhpat Jail.

If he were serving his prison sentence, then how could this blast target him? The truth is that Hafiz has never been in jail but at home. It proves that Pakistan is not serious in punishing terrorists under FATF conditions. The FATF would have noted this and would keep it under consideration for future meets.

India rejected Pakistan claims. The Indian External Affairs Ministry’s Spokesperson stated, “It is not new for Pakistan to engage in baseless propaganda against India. Pakistan would do well to expend the same effort in setting its own house in order and taking credible and verifiable action against terrorism emanating from its soil and terrorists who have found safe sanctuaries there.” There are claims that this blast was the result of an internal tussle for power between terrorist groups.

For years, Pakistan had been accusing India of supporting the Tehreek-e-Taliban Pakistan (TTP), a terrorist group attacking the Pakistan army. It was this group which claimed responsibility for the Quetta hotel blast of April this year, targeting the Chinese Ambassador, as also the strike on the army school in Peshawar in 2014, in which 114 children perished.

Pakistan claimed to have produced a dossier listing Indian RAW and Afghan intelligence agency NDS working together to train and fund the TTP. Pakistan went to the extent of claiming that India should be taken to task by the FATF for supporting the TTP. The Pakistan released dossier of Nov 2020 stated, “India united TTP with banned dissident Terrorist organizations.”

On the contrary, during the in-house briefing conducted early this month to Pakistan senators by the DG ISI, on the emerging scenario in Afghanistan post US withdrawal, General Bajwa was reported to have stated that the TTP and Taliban are, “two faces of the same coin.” Pakistan military leaders have also admitted that pressure on the Taliban implies increased attacks by the TTP. Thus, the Taliban, which controls the TTP, employs it as a lever against the Pakistan army. Afghanistan also reports that approximately 6500 TTP fighters are operating alongside the Taliban in Afghanistan.

It is also unofficially reported that the Pakistan army reached an agreement with the Taliban that in return for not providing a base to US forces, the Taliban would reign in the TTP. If the Taliban is controlling the TTP and has the power to release or reign them in at will, then where does India come into the picture. India has no links with the Taliban. Pakistan was falsely accusing India, a fact why its words have never been supported.

In a similar manner, Pakistan blames India for the rise of Baloch insurgency. It announced the supposed arrest of Kulbhushan Jadhav, who was kidnapped from Iran, as captured in Baluchistan, to prove its point. Pakistan President, Dr Arif Alvi, addressing a workshop on Baluchistan, stated, “India is hatching conspiracies against Pakistan to destabilise it by funding militant organisations to carry out terrorist activities,” adding that India would not succeed, “Pakistan's armed forces were fully capable of overcoming security challenges, especially the fifth-generation war.” The projection by Pakistan leaders displays that India has surrounded Pakistan from all directions including Iran and Afghanistan. Nothing could be more absurd and a greater outright lie.

The recent killing of nine Chinese workers and four others in a blast in a bus carrying them to the China developed 4,300 MW Dasu hydropower project in Upper Kohistan area of Pakistan’s Khyber-Pakhtunkhwa province is currently being investigated by Chinese and Pakistan intelligence agencies. No terrorist group has claimed responsibility. For Pakistan, everything happening within has an India link, this would be no exception.

Imran’s obsession with India is such that for every issue he has to compare Pakistan with India. Recently, ignoring the fact that his economy is currently on a ventilator and surviving only on loans and bailouts, Imran stated, “today when their (Indian) growth rate is at minus seven per cent, ours is at four per cent even though our position was not as strong as theirs.” Imran feels that by comparing with India it would take his suffering public’s mind away from galloping inflation, runaway food prices amidst shortages and rising unemployment.

Pakistan’s obsession with Kashmir led to Imran tying himself in knots. In April this year, the Pakistan cabinet cancelled procurement of sugar and cotton from India claiming that there would be no trade with India until it restores Article 370 in Kashmir. Currently sugar prices are soaring in Pakistan. The Indian government refused to even respond to his demands. Moeed Yusuf stated, in desperation, that there would be no further backchannel talks with India. India has been talking to the Pakistan army ignoring its political leadership which is displaying higher levels of frustration by the day.

With Kashmir remaining peaceful, the public ignoring calls for hartals by the Hurriyat, the realization has begun to set in that Pakistan’s Kashmir policy is in tatters. The looming civil war in Afghanistan would only enhance Pakistan’s security issues. The FATF continues to hold Pakistan to ransom due to it not implementing major demands of acting against terrorist groups and their leaders. To add to its misery the US continues to ignore it, while China begins to doubt the security of its investments in the CPEC. It is hoping that by accusing India of terrorism and being responsible for all its problems, it would gain some respite.

Pakistan is moving downhill only because of its own follies and obsession with India. Its suffering population is being consoled by accusing India for its ills and fake comparisons. It is time for Pakistan to look inwards, rectify its policies, before it economically collapses and faces severe security concerns.

***The writer is a retired army official; views expressed are his personal