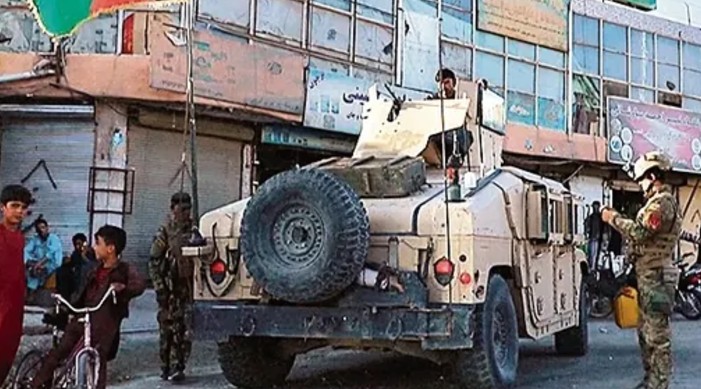 The Taliban have captured three more provincial capitals of Afghanistan, putting nine out of 34 such centers of the country in insurgents’ hands

As Afghanistan continues to simmer in violence and fear of the Taliban takeover of the country growing, a social media campaign #SanctionPakistan has continued to trend globally for the fourth consecutive day on Thursday calling out for Pakistan’s role in backing Taliban.

Users of twitter and Facebook among other social media have blamed Pakistan for continued support to the Taliban at a time when violence is at its peak in Afghanistan. They have called on the international community to impose sanctions on Pakistan for its role in destabilizing Afghanistan.

The topic #SanctionPakistan was trending on Twitter for the fourth-day with an excess of 228k tweets as of Thursday afternoon. Twitterati in their posts called for imposing sanctions on Pakistan for backing the Taliban.

Similarly on Facebook, more than half a million posts with the hashtag SanctionPakistan have already been made as of Wednesday.

According to media reports, Habib Khan Totakhil, a former Wall Street Journal Reporter is among the main proponents of the trend and has helped trend the hashtag on twitter.

“If you are Afghan or a friend of Afghanistan, speak up,” he had tweeted on Monday when #SanctionPakistan began gaining widespread use.

“Use whatever platform you have to support the Afghan call for ending the proxy war. Afghanistan is under attack and needs you the most now. #SanctionPakistan”.

Rahmatullah Nabil, Former Director of National Directorate of Security (NDS) of Afghanistan also joined the chorus #SantionPakistan when he used the hashtag with a video of a TV debate in which Pakistan Prime Minister Imran Khan admits that the Pakistani Army and ISI trained Al-Qaeda.

Pak-Afghan political relations have been on the boil, especially since the last month after the Afghan government withdrew its ambassador and diplomats from Islamabad following the kidnapping of the ambassador’s daughter at a sensitive time for the Afghan peace process.

On 15 July in a twitter post, Saleh had revealed that Islamabad warned Afghan forces that any move to dislodge Taliban from the Spin Boldak area will be retaliated by the Pak Air Force.

On Friday, sharing the stage with Pakistan Prime Minister, Imran Khan, President of Afghanistan, Ashraf Ghani slammed Pakistan for not stopping terrorists from crossing over into Afghanistan and for failing to convince Taliban to move for successful talks.

“Intelligence estimates indicate the influx of over 10,000 jihadi fighters (into Afghanistan) from Pakistan and other places in the last month,” Afghan President Ghani had said at a conference on “Central and South Asia: Regional Connectivity, Challenges and Opportunities” in Tashkent last month.