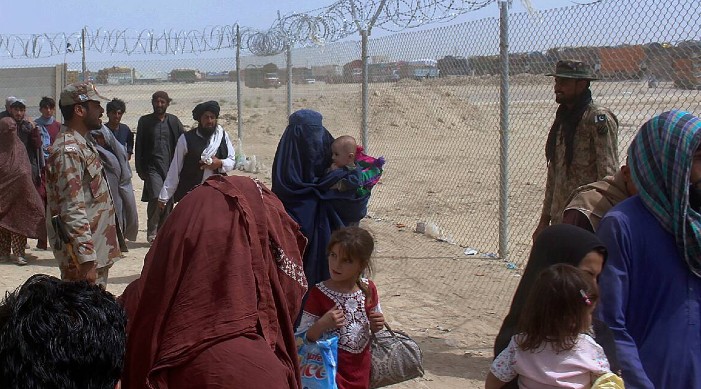 With the Taliban in control of Afghanistan, blame on Pakistan will increase as human rights violations and atrocities rise

Moeed stated, “We are beginning to see a very conscious, deliberate effort by the Afghan government to scapegoat Pakistan. Afghan and Indian accounts are being used to malign Pakistan.”

He added, “Attempts are underway to blame Pakistan for Afghanistan's failures. As the Taliban offensive is increasing, there are campaigns to shift its blame on Pakistan.”

Earlier, Fawad Chaudhry blamed India and the Afghan leadership for spreading anti-Pak sentiment globally. With the Taliban in control in Afghanistan the blame on Pakistan will increase as Human Rights violations and atrocities rise.

Interestingly, almost 22% of ‘sanction Pakistan’ tweets were from within, for which its leadership blamed the Pashtun Tahafuz Movement (PTM), a Pashtun movement demanding an end to enforced disappearances.

Fawad Chaudhry, Pakistan’s information minister stated, ‘it transpired that India led the top trends against Pakistan and the biggest player which helped India was PTM and its activists.’ Yusuf’s remarks were part of a media briefing organized to launch the Ministry of Information and Broadcasting’s ‘Deep analytical report on anti-state trends.’

The report was an assessment of anti-Pak social media trends from 2019 to 2021, for which, as usual, India was held responsible.

The Pakistan leadership believes that the current anti-Pakistan global push is aimed at discrediting the Pakistan army, keeping the country in the FATF Grey List and blaming it for the current Afghan embroil-go.

As per Pakistan, Afghan government officials led the charge on social media platforms, accusing Pakistan of supporting the Taliban. The Afghan defence ministry had regularly posted photographs of arrested Pakistan nationals in Afghanistan and confessions of captured terrorists admitting they were trained in Pakistan.

‘Sanction Pakistan’ has impacted Islamabad’s global reputation, compelling them to employ senior ministers to debate the subject, hoping to mitigate the damage.

Participating in a TV discussion on ‘Sanction Pakistan,’ SM Qureshi, Pakistan’s foreign minister questioned Afghan’s for pushing this trend. He emphasized Pakistan’s support to Afghan refugees, keeping borders open even when the pandemic was at its peak and desiring peace in the country.

As expected, he blamed India for being behind the social media storm. ‘Sanction Pakistan’ also led to protests by the Afghan diaspora, supported by other activists, across the globe. Protests were held in Washington, Brussels, Denmark, UK, Germany and Sweden.

The common world belief is that Pakistan is responsible for the current mess in Afghanistan. While the US and other governments were pressurizing Pakistan to push the Taliban into talks and reduce violence, Pakistan accused the Afghan armed forces of failing to stem the Taliban.

Chris Alexander, a former Canadian minister and diplomat, stated in a tweet, “This isn’t just a Hashtag trending on twitter. It reflects the determination of Afghans, Pakistani’s and citizens of many other states to live in peace – free from invasion, proxy war and terrorism.”

He added, “Pakistan's invasion of Afghanistan constitutes an armed attack and act of aggression under Chapter VII of the UN Charter. The international community must take action under Articles 41 or 42 to uphold international law and the rules-based international order.”

Christine Fair, a South Asia expert, tweeted, ‘If you care about Afghans and the slaughter they are facing at the bloodied hands of Pakistan’s proxies, you can do something. ‘Sanction Pakistan.’

Pakistan’s support to the Taliban, diverting terrorists of its owned terrorist groups including LeT and JeM, as also employing members of its army and Special Services Group to fight alongside the Taliban is well established. Reports flow of injured Taliban fighters being treated in Pakistan’s hospitals.

In a recent article, Ismail Khan, a US-allied warlord, defending Herat, currently under custody of the Taliban, was quoted as stating, ‘that this war, it isn't between Taliban and the Afghan Government. It is Pakistan's war against the Afghan nation.’

All Pakistan’s attempts to distance itself from support to the Taliban are considered lies when images emerge of Pakistani’s, killed fighting alongside the Taliban, being buried in Pakistan.

These funerals are attended by hundreds and the Taliban flag is in open display. These are rallying points for further recruitment.

The world's accusations towards Pakistan grew stronger when Imran Khan announced that the Taliban are normal civilians and not a military outfit against whom Pak security agencies can act.

He even supported the Taliban view by stating that they would only come forward for talks once the current President of Afghanistan, Ashraf Ghani, is deposed.

Evidently, Imran disliked Ashraf Ghani. SM Qureshi, Pakistan’s foreign minister was accused of being the Taliban’s spokesperson when he supported a Taliban led regime by mentioning that it would prevent a resurgence of Islamic State militants in the country.

While Imran termed Osama Bin Laden a martyr, Qureshi refused to call him a terrorist.

For western powers the utility of Pakistan as a frontline state will end as soon as western forces and embassy staff withdraw from Afghanistan. It will be treated as a pariah state.

As Chris Alexander stated, “Putin’s Russia invaded Ukraine: the world sanctioned them. Pakistan is invading Afghanistan: what are we waiting for?’ Pakistan’s reputation as a nation seeking peace in Afghanistan is being questioned.

Pakistan is aware that there will be violence and revenge killings in Afghanistan, the blame for which would be on their doorsteps. It is likely that both Afghanistan and Pakistan could face sanctions.

It is too late for Pakistan to change track. It will be the first nation to recognize the Taliban led Afghanistan. ‘Sanction Pakistan’ would grow in demand as the Taliban kill more innocents. It is this concern which is pushing Pakistan to defend itself vigorously while accusing the US of abandoning Afghanistan as also the Afghan forces for not fighting.

In case Pakistan is sanctioned, its financial problems would multiply manifold and it could become a global pariah.

***The author is a retired Indian Army official; views expressed are his own