India has called for the waiver of Intellectual Property Rights (IPR) and dismantling new trade barriers in the global fight against the Covid-19 pandemic.

“Our response to the pandemic needs to ensure equitable access to vaccines and other COVID-19 related health products by ensuring quick resolution of the supply side constraints. One of the ways to demonstrate this is by accepting the TRIPS waiver proposal,” Union Commerce & Industry Minister Piyush Goyal saidnon Tuesday.

He also underlined the need for an early universal vaccination against Covid-19.

“COVID-19 crisis is a powerful reminder of our inter-connectedness, and the need for a coordinated global strategy to overcome such an unprecedented public health situation,” he said.

During his address, he also called for the free flow of health services by making it accessible.

He used the opportunity to offer India's telemedicine initiative “e Sanjeevani” to the entire world, pointing out that it.had been serving millions of Indians.

“India is among the few countries which is on track to exceed its commitments as per the Paris Agreement. We urge the Members to fulfil their commitments regarding Transfer Of Technology and Climate Finance, which are far from being fulfilled by the Developed Countries,” he said.

Sustainability cannot be seen in isolation and has to be linked to making available grant based, long tenure, low cost and concessional & affordable technologies, he pointed out.

“India has consistently maintained that environmental/sustainability measures need careful assessment to ensure that they do not become new trade barriers and the right forum for them is the dedicated Multilateral Environmental Agreements,” he said.

The minister called for an equitable and balanced outcome to the trade negotiations in the Fisheries sector. He advocated that countries engaged in distant water fishing should stop subsidizing their fishing in high seas and gradually reduce their fishing capacities, particularly, for overfished stocks.

“To achieve balanced outcomes in Fisheries Subsidies, policy space for future is a must, not only to protect the livelihoods of poor and marginal fishermen and address, the food security concerns but also to diversify, modernise and develop the fisheries sector, he said.

Separately, Goyal also discussed the Agreement on joint multilateral positions in Fisheries etc with his Australian counterpart during a one-to-one meeting on Monday.

On the sidelines of the G20 Trade Ministers Meeting, the Commerce & Industry Minister held a series of meetings to advance India's trade position and negotiated bilateral and multilateral agreements.

Among the ministers he met were those from the US, UK, EU, Brazil, China, Australia, South Africa, Indonesia, Canada, South Korea and Mexico.

Goyal unequivocally put forth the position that India is working towards the success of the upcoming WTO 12th Ministerial Conference (WTO MC12) next month but the outcome must be just and equitable.

“Historical wrongs against developing countries must be corrected rather than being carried over,” he said.

In his meetings with the Canadian Minister, Goyal discussed steps to take forward the FTA negotiations with the newly elected Government while he called upon his South Korean and EU counterparts to accelerate review of the FTA.

With the Mexican Minister, Goyal discussed cooperation in healthcare. He also met with the DG, WTO to discuss the MC12 agenda. 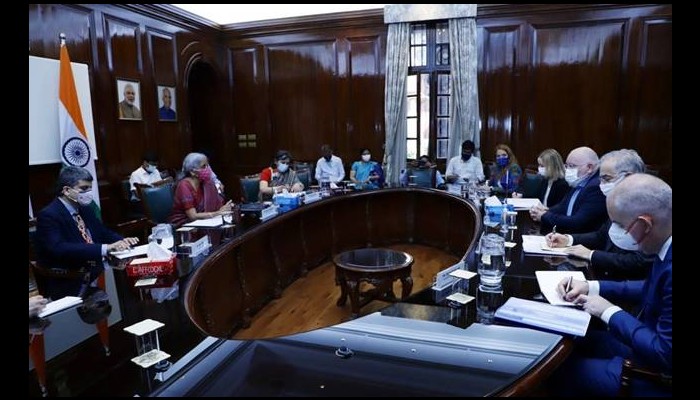