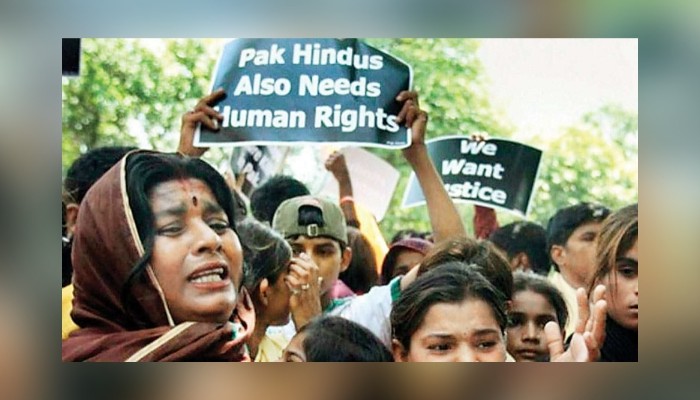 Around 1000 girls between the ages of 12-25 from minorities are forcibly converted to Islam in Pakistan every year, as per a parliamentary report

Religious minorities continue to lead abysmally worse life in Pakistan and the year 2021 was no different at all when it came to their rights and respect in the country where “the government’s frequent denial of the reality of forced conversions and marries have aggravated the situation to horror,” writes Qamar Rafiq in his opinion piece in Pakistan’s Daily Times.

Making a graphic presentation on minorities’ life in Pakistan, he writes: “Perhaps, just like previous governments, the current Pakistani administration believes they are doing enough but the truth is the opposite. Today, the abduction, forced conversions and marriages of non-Muslim girls have become one of the biggest human rights crises of the era.”

“Around 1000 girls between the ages of 12-25 from minorities are forcibly converted to Islam in Pakistan every year and married to their abductors,” Rafiq writes in his article while quoting a report published by the All-Party Parliamentary Group (APPG) on November 26, 2021.

The report, Rafiq writes, further highlighted “the practice of forced conversions and marriages have amplified steadily in recent years that hints at the calamitous handling of the government to reinforce much-needed legislation to curb this inhuman crime.”

The London-based columnist hits the Pakistan government for its failure to curb child marriage in the country. “The government has been unsuccessful to implement the Child Marriage Restraint Act 1929 and the Sindh Child Marriage Restraint Act 2013, which raised the legal minimum age of marriage to 18 in Sindh province. Regrettably, these laws have not been implemented properly in Sindh and other provinces of Pakistan,” he writes.

The writer has expressed his regret over the Pakistan government’s apathy towards the country’s religious minorities.

“Unfortunately, the government is taking a rather long time to understand the problem, which is causing huge damage to the country’s reputation. We are all familiar with the fact that this crisis is a product of the government’s failure over decades to protect the religious minorities from abuses by non-state actors and religiously inspired extremists,” writes Rafiq in his column.

Known for his hard hitting write-up, the columnist exposes Pakistan’s approach towards Hindu, Sikh, Christian and other minorities in the country.

Quoting the APPG report, he writes “the parliamentary report also casts light on how Pakistan has failed to ensure the security and respect of women belonging to religious minorities, with experts calling the situation a national and international tragedy.”

There are many reasons for this: “Firstly, it is evident that Pakistan’s ineffective policy reforms to address forced conversions and marriages have exacerbated the situation. For instance, last year, the Parliamentary standing committee rejected an anti-forced conversion bill saying the “environment is unfavourable” to formulate this law which prompted a nationwide protest,” he maintains, while tearing apart Islamabad on the minorities issue.

“It is wholly illogical and disappointing that such marginal opportunities for legislative and policy reforms are flushed down by entrenched lines of incompetence and lack of seriousness. It is no surprise that such astonishingly oppressive measures have played a role in creating a pandemic of forced conversion,” Rafiq writes.