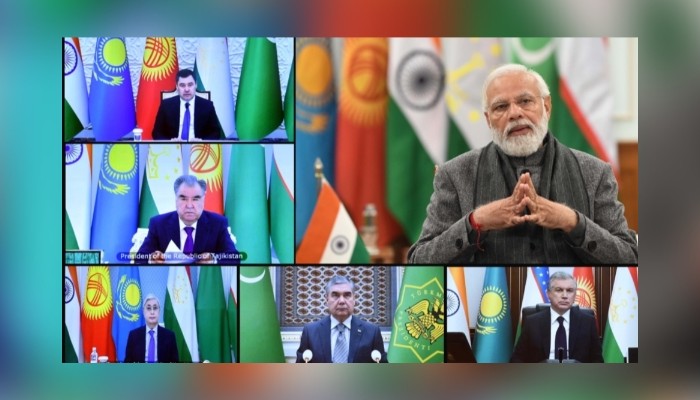 India and five Central Asian nations on Thursday emphasized that connectivity projects deserve priority attention and could be a force-multiplier for trade and economic cooperation and contacts between countries and people.

Prime Minister Narendra Modi hosted the first India-Central Asia Summit in virtual format on Thursday, which was attended by Presidents of the Republic of Kazakhstan, Kyrgyz Republic, Republic of Tajikistan, Turkmenistan and Republic of Uzbekistan, said a statement of the Ministry of External Affairs.

A comprehensive Joint Declaration was adopted by the leaders that enumerates their common vision for an enduring and comprehensive India-Central Asia partnership, the statement informed.

According to the Joint Declaration statement titled ‘Delhi Declaration of the 1st India-Central Asia Summit’, the leaders discussed the current situation in Afghanistan and its impact on the security and stability of the region.

The leaders noted that further development of mutual connectivity is essential for enhanced trade and commerce between India and Central Asian countries in the context of their land-locked nature and lack of overland connectivity with India, the statement said.

The leaders emphasized that connectivity projects deserve priority attention and could be a force-multiplier for trade and economic cooperation and contacts between countries and people, it added.

The sides agreed that connectivity initiatives should be based on the principles of transparency, broad participation, local priorities, financial sustainability and respect for sovereignty and territorial integrity of all countries, said the statement.

In this regard, the leaders noted the results of the High-Level International Conference "Central and South Asia: Regional Connectivity. Challenges and Opportunities”, held on July 15-16, 2021 in the city of Tashkent, which provided a unique opportunity to openly discuss the entire range of topical development issues and strengthen regional interconnection between the countries of Central and South Asia, it added.

In this context, they noted the initiative of Uzbekistan to adopt a special resolution of the UN General Assembly on strengthening the connectivity between Central and South Asia, the statement noted.

They also noted Turkmenistan’s proposal to organize, in cooperation with the UN, the International Ministerial Transport Conference for Landlocked Developing Countries, to be held in Turkmenistan in April 2022, it mentioned.

The leaders noted the need for continued large-scale and long-term economic cooperation between Central Asian countries and India in order to strengthen and expand inter-connectivity, the statement said.

In this context, the President of Turkmenistan stressed on the importance of TAPI gas pipeline project, it informed.

The Indian side welcomed the interest of Central Asian countries to utilize the services of Shahid Beheshti Terminal at Chabahar Port for facilitating their trade with India and other external markets, the statement held.

The sides agreed to continue engagement for further developing the transit and transport potential of their countries, improving the logistics network of the region and promoting joint initiatives to create regional and international transport corridors, it mentioned.