India, Russia agree to deepen cooperation on issues on the UNSC agenda 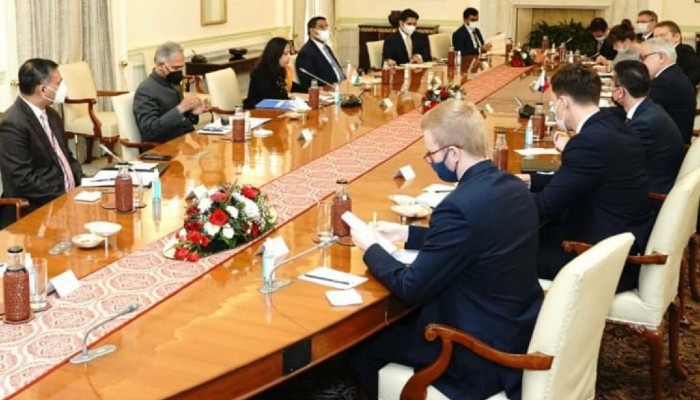 The India-Russia UN consultations were held in New Delhi on Monday.

India and Russia have agreed to deepen cooperation on issues on the UNSC agenda, keeping in view their Special and Privileged Strategic Partnership.

A tweet by the Ministry of External Affairs Spokesperson Arindam Bagchi said that the Indian side congratulated Russia on its upcoming Presidency of the UN Security Council in February.

“Both sides agreed to deepen cooperation on issues on the UNSC agenda, keeping in view their Special and Privileged Strategic Partnership,” he added.

In the India- Russia Joint Statement following the visit President Putin on December 6, 2021, Russia welcomed India’s election as a non-permanent member of the UN Security Council with an overwhelming majority for a two-year term.

“Russian Side appreciated India’s UNSC priorities which includes commitment to strengthen and reform of the multilateral system, rule of law, fair and equitable international system and are anchored in the Indian ethos of "Vasudhaiva Kutumbakam”, i.e. the world being one family,” it added.

“Both Sides highlighted that India’s election to the UNSC has provided additional opportunities to coordinate efforts on most pressing issues at the UN based on mutual understanding and a shared view and approach to the global world order,” the Joint Statement had further said.

“Both Sides called for comprehensive reform of the UNSC to reflect contemporary global realities and to make it more representative, effective and efficient in dealing with issues of international peace and security,” it informed.

“President Putin congratulated India on its successful Presidency of the UN Security Council in the month of August and reiterated Russia’s support for India’s permanent membership of a reformed and expanded UN Security Council,” the statement further said.