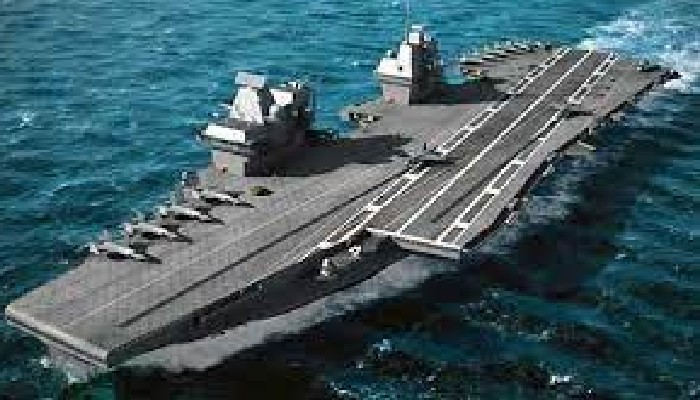 The cry for the third aircraft carrier for India is warming up; it is a mixed bag of melodies--from the sonorous to the cacophonous

There are two schools of thought. While one group very seriously promotes commencing work on the Indigenous Aircraft Carrier-II after the IAC-I, INS Vikrant, a 40,000-ton ski-jump carrier, built in Cochin Shipyard Limited and, is currently undergoing sea trials and is likely to be commissioned in 2023.

Although, the aircraft for this carrier is yet to be selected and the news of other onboard weapon systems is yet to waft through, there is a strong belief that a concurrent activity on the IAC-II will have requisite cycle energized and available.

It may also help in obviating the unhappy and painful experiences of acquiring INS Vikramaditya, erstwhile “Admiral Gorshkov” from Russia, “due to humongous cost escalations, negotiation complexities, delayed delivery and commissioning, and now, recurring refits”.

Moreover, one of the cardinal arguments put forth is that this valuable experience gained by the Cochin Shipyard for its deeply satisfying work in raising INS Vikrant should just not be allowed to fritter away. It is after all strategic knowledge of handling strategic materials with strategic technologies-- which are of crucial importance with China having embarked on the production of their third aircraft carrier.

It all grows out of India’s paramount concern for control and supremacy in its maritime domain. Independent India took more than half a century to enunciate that, the arc of the Indian Ocean between the Straits of Hormuz and Malacca, is a zone of its strategic concerns.

This feature, however, was treated as crucial for the colonial British economy and the strategic integrity of the Raj. The end of the cold war and the adoption of market forces economy by India may have hastened our policy but the notions of the ocean as a conflict free zone and the freedom of the seas through sea lanes of communication were always serious security issues.

And, this situation is vastly aggravated by the Chinese regime having secured effective control of ports in the Bay of Bengal, built a military base in the Horn of Africa , continued with their forays in the Indian Ocean and above all perpetrated a highly adversarial conduct in the South China sea. The Indian Ocean had to be kept free from power rivalries and acts of piracy on the seas.

The contrary view basically comes on grounds of expenditure and resources. A futuristic IAC II would mean US $ 10 billion spread over seven odd years while Navy’s own capital acquisition outlay is pegged at US$ 4.57 billion for 2021-22.

The Indian Navy has a plan to spend US $6 billion towards its indigenous submarine project in coming years. It has a plan to spend nearly US$ 4 billion on the procurement of combat jets for the IAC-1. The moot question, therefore, is: Where will the money come from? Even with pooling of all resources of defence and security funds the Navy will run short for its capital acquisitions.

At this juncture we run into the “desirability or the undesirability” syndrome with respect to the acquisition of the IAC-II, but I believe in a staggered induction process an IAC-II would be highly feasible. The point here to note is that with territorial disputes growing worldwide, aircraft carriers have become high-value warfare assets globally. The US navy is known to have launched their combat aircraft from aircraft carriers during the operation ‘Enduring Freedom’.

However, at a threat level, an aircraft carrier per se, is considered highly vulnerable in submarine infested waters like of which are frequently being reported as Chinese submarines freely operate. Although these fears are real with several examples dating back to World War II, over the years submarine detection arts have been honed up with development of matching technologies. They are not only part and parcel of counter submarine packages on board the carrier, but are also placed on ships sailing along with the carriers.

We will also do well to note that anti-submarine aircraft, P8-I is an inseparable adjunct of India’s maritime force and since its induction, several interoperability exercises have been undertaken not only with ships of the Indian Navy, but also with several friendly navies.

The most astounding criticism of Indian aircraft carriers is that they did not provide commensurate returns in India’s war history.

This is not true. INS Vikrant after most urgent repairs sailed on the midnight of December 3, 1971 when hostilities were declared, with Pakistan having attacked some Indian airfields in the North-West. It was positioned in the Bay of Bengal off the coast of East Pakistan. INS Vikrant’s two air squadrons of Sea Hawk fighter jets and Alize surveillance aircraft were used in strikes on ports, merchant ships and other targets—all this to prevent Pakistani forces from escaping through maritime routes.

Sea Hawks had successfully bombed Chittagong harbor, the airfield and several targets. In all, about 300 strike sorties were flown by aircraft from INS Vikrant in 10 days during the Bangladesh Liberation War. In retrospect, INS Vikrant and its aircraft had played a crucial role in the liberation of Bangladesh.

***The writer is a strategic affairs commentator; views expressed are his personal