Ukraine crisis: A war whose prognosis not easy to be ascertained 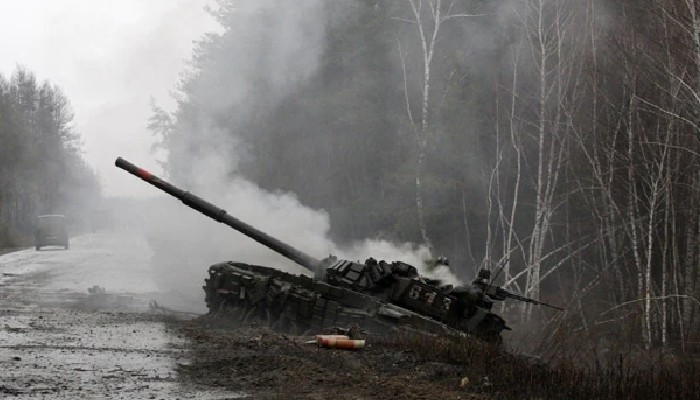 Russian forces have intensified their attacks on Ukraine; they have already entered Ukraine’s second-largest city Kharkiv and fighting is continuing between warring forces of the two countries. They are raining short range rockets and missiles on military targets in Ukraine.

What is most ominous is that a several miles long armada of Russian Tanks has been seemingly identified through satellite images as racing towards Kiev, the capital of Ukraine. Will the Ukrainian forces be able to counter these tanks with the most advanced anti–tank weapons supplied by other NATO countries is to be seen.

But Ukrainian armed forces have succeeded in shooting down several attack helicopters with the help of man portable SAMs, the FIM – Stinger missiles. Several NATO member countries, it is reported, have provided nearly 1000 of these SAMs to Ukraine.

We would recall that it is these SAMs which brought down the might of the Soviet Air Force in Afghanistan leading the Soviets to succumb to sheer economic pressures and a hasty withdrawal from Afghanistan. The use of air power by the Russian Air Force is thus limited to Helicopter Gun Ships carrying special forces, perhaps Spetznaz, some of whom have been captured.

Amidst on-going war, Russia and Ukraine held the first round of talks on the Belarus border, but it failed. Moscow has readied for the second round of talks with Ukraine, and has to be seen whether it remains successful or not. Russia has, meanwhile, announced placing its “nuclear deterrence force” on high alert. This is seen as deterring phenomena against the NATO forces who have mobilized their air forces in their own areas of operations, but it has very dangerous portents.

Should the conflict further escalates and applications of enhanced range missiles are brought into play by the US and NATO forces on the lines of “force de frappe,” a French concept of nuclear warfare mentioned here only to illustrate a nature of conflagration although the French regime has been extremely moderate in its communication to the Russians regime and also in its public postures.

In the comity of nations, France ranks second to the US as a nuclear armed nation. The UK is also a nuclear power. Both the US and Russia have sizable number of nuclear warheads. Together with China, these nations are signatories of the Nuclear Proliferation Treaty. They are already members of the UN Security Council.

Despite this, what is disturbing is the knowledge that the historical “Intermediate Range Nuclear Forces Treaty (INF)” conceived and signed on December 8, 1987 between the US and Soviet Union (Now Russia) had outlived its life on August 2, 2019 leading both the parties to withdraw from it.

This treaty was aimed at eliminating all ground launched ballistic and cruise missiles with the capacity of striking ranges between 500 kms to 5000 kms and was working towards discarding nuclear arsenal deliverable by these projectiles.

The type of missiles and rockets being aimed at Ukrainian targets on the other hand are short range weapons which would achieve at best an accuracy of about 30 to 40 meters.

They would thus leave substantial collateral damage in their wake.

Ukrainian forces are not seen to be using such missiles against Russian force concentrations or even Russian main land. It would thus be logical to assume that the Ukrainian strategy is to contain the conflict on its own soil and not go beyond. There is some merit in the prevailing prognosis that Russians troops will not reduce the potency of their hybrid campaign till they obtain de-facto control over the Ukrainian territory.

This conclusion emerges from reaction and the public postures adopted by Volodymyr Zelensky, President of Ukraine reacting to the first meeting between both the countries at the Belarus border although the Russians have refrained from commenting. But have heightened the military activity.

On the other hand, several NATO countries have pushed a sizable amount of small arms and light weapons inside Ukraine. In that background, we are likely to witness more fierce battles on Ukrainian soil in the coming days. But largely it has been seen that the US and the NATO members have remained confined to deep and polemical rhetoric aimed at Russia.

There is no attempt at joining the issues with the Russians with a military force. The strongest reaction has come forth from Germany, Europe's strongest economy. It has shelved its Nord Stream II gas project whilst cutting the gas supply from Russia in Toto.

But most notably Germany has declared an intended military budget of US $ 100 billion dollars for a re-armament programme. This is a profound thematic change in the European Security architecture seen after World War II.

Even Finland and Sweden have come forward to join NATO despite warnings from Russian officialdom. They share a substantial length of borders with Russia. Erstwhile members of the “Warsaw Pact”, they are deeply skeptical of Russia’s designs.

At the current juncture, the list of Russian friends has dwindled substantially. China is the only country publicly supporting Russia in the global diplomacy domain.

India on the other hand has maintained a posture of “studied neutrality,” a stance construed as “immoral to helpless” by some Indian commentators. Yet the noteworthy fact is that the government is feverishly working towards evacuating Indian students from war-ravaged Ukraine, while the country’s largest public sector bank, the State Bank of India has stopped its financial transactions with Russian banks.

***The author is a strategic affairs commentator; views expressed are his personal