As highly neglected region, PoK is all about Islamabad’s continued exploitation and abuse 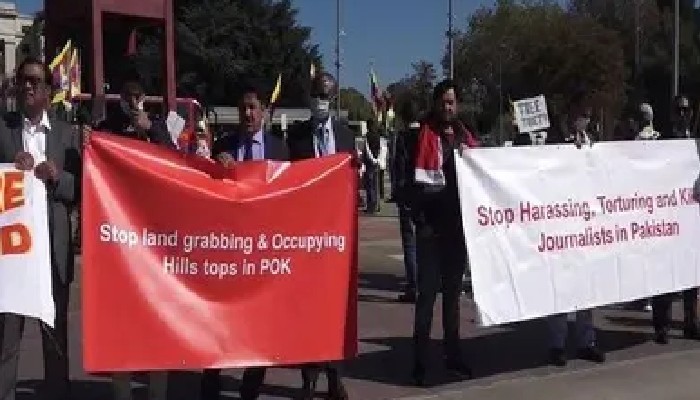 In Pakistan occupied Kashmir, over four million residents have never been allowed to open their mouths and express their political and socio-economic grievances

Recently, Finance Minister Nirmala Sitharaman presented a Rs 1.12 lakh crore (US $13.33 billion) budget for the Union Territory of Jammu and Kashmir for the year 2022-23 in the Lok Sabha which is aimed at rebuilding the economy and creating jobs in the region.

According to the last census of J&K (2011) the population of the then state was 1.25 crore which is projected to be at 1.40 crore now. The per capita budget in J&K is over 950 US dollars per annum.

At the same time the annual budget of Pakistan-occupied-Kashmir (PoK) in 2021-22 was 141 billion Pakistan rupees which is just over US $ 78.55 million. According to the 2017 census, the population of the PoK was 40.5 lakh which must have increased by two or three lakh people in the last five years. Even if the 2017 population is taken into consideration the per capita income of the PoK is less than US $ 200 per annum.

If the per capita budget is compared, New Delhi allocates nearly seven times more money to J&K than Islamabad gives out to the PoK. Islamabad has historically neglected basic development needs in the region, which suffers from poor infrastructure and a lack of available resources and technology.

The high rate of unemployment in the PoK is a result of insufficient public and private investments in the productive sectors of the economy.

The PoK has been treated as a colony by Pakistan as no signs of development are visible there. Its over four million residents have never been allowed to open their mouths and express their political and socio-economic grievances.

The local government and local businesses have largely not taken advantage of natural resources and human capital present in the region. They have not had adequate means of expressing dissatisfaction with the Pakistani government’s regional policies, and generally suffer as a result of underdevelopment and disenfranchisement.

Due to the lack of quality educational institutions, health care facilities and dearth of available jobs, residents of the PoK migrate to Pakistan’s large cities or to gulf countries in search of menial-paying jobs at hotels, restaurants, drivers and labourers.

As per the Planning and Development Department of the PoK, 78 percent of the total households do not have tap water connections.

Similarly, healthcare facilities in the PoK are well below par even according to Pakistani standards. For example, the average population per doctor in Pakistan is 1127; whereas in the PoK this ratio is 4799.

Similarly, infant mortality rate is the worst in PoK vis-à-vis mainland Pakistan. There is no industry of any worth in the PoK and Islamabad never encouraged even the local people to make some kind of investment.

Rulers in Islamabad have not paid any attention towards developing any sector in the region. Rather they have emphasised on turning the PoK into training camps and launch pads for terror organizations.

The Punjabi Taliban network— a conglomerate of terrorist groups of Punjabi origin—sectarian as well as those focused on the conflict in Kashmir— is also using the PoK as a safe haven for its activities.

On the other hand, J&K is all about success stories and development due to the liberal funding by New Delhi.

In particular the region is witnessing a massive development, after the abrogation of so-called special status and its transition into a Union Territory, is making a common Kashmiri realise that he was misled and misguided by his so-called leaders.

The money provided by the Center is utilised for the welfare of the people of J&K without discrimination and execution of work on the ground is ensured.

The train to Kashmir is not that far-away which will revolutionize the Valley’s economy. Rs 50,000 crore INR (6.58 billion USD) investments will come to Jammu and Kashmir. Global investors are now eyeing the untapped market in Jammu and Kashmir.

At least six agreements have been inked by global investors with J&K government at the Dubai Expo2020. The J&K government has signed five MoUs with Al Maya Group, MATU Investments LLC, GL Employment Brokerage LLC, Century Financial and Noon E-commerce; one LoI between Magna Waves along with Emaar Group and Lulu International at Dubai Expo.

Pakistani propaganda machinery has always misled people in the Valley in particular and Muslims in general the world about the imaginary bad situation in Kashmir.

The reality is that the PoK is today one of the most exploited and unfortunate regions of the world today due to Islamabad’s brutal policies. No outsider knows what is going on inside this part of the world.

Pakistani military generals and feudal politicians do not even think that residents of the PoK are human beings. They have extracted limited resources of the region in a way that today they are left with nothing. They have been completely brutalized and alienated. And in the name of budget, Islamabad allocated peanuts for the development of the PoK.