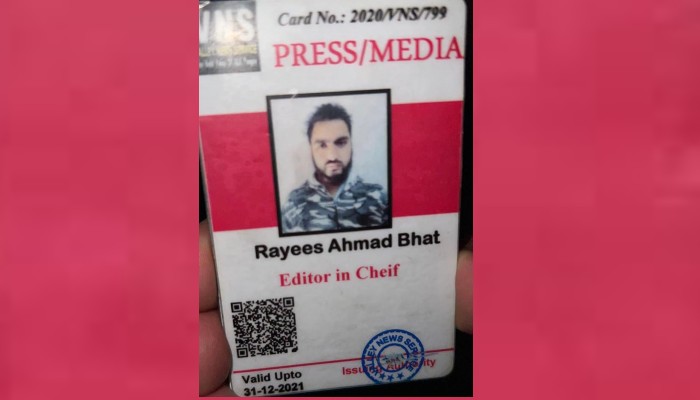 In comparison to previous years, incidents of terrorism have significantly declined in Jammu and Kashmir, yet what is befuddling the common people is the emergence of new development in the Union Territory and that is: Growing nexus between Pakistan-based terrorists and J&K’s journalists.

However, before dusts could have settled on the arrest of Fahad Shah, the Editor-in-Chief of the online news magazine ‘thekashmirwalla,’which was, as per the J&K Police, involved in alleged glorification of terrorist activities in the Valley, the killing of a Pakistan-based Lashker-e-Toiba (LeT) terrorist Rayees Ahmad Bhat, who had taken shield under the garb of journalism, has once again brought to the fore how the institution of journalism is being misused by terror-handlers from across the border.

Bhat, a LeT terrorist, who hailed from Bijbehara area of South Kashmir, was killed along with his associate Hilal Ahmad Rah in congested Rainwari area of old city Srinagar on Wednesday morning.

The police recovered a press identity card from the possession of slain Bhat. The police said before becoming an active terrorist in August 2021, Bhat was running an online news portal “Valley News Service” in Anantnag.

Kashmir Police Chief Vijay Kumar said the latest incident indicates a clear case of misuse of media. “Rayees Bhat had joined terrorist ranks in August 2021 and two FIRs are already registered against him for terror crimes,” he told reporters.

A senior police officer said there has been mushroom growth of online news portals, facebook pages and WhatsApp groups in Kashmir in the recent years.

“Now even terror handlers have taken refuge behind the garb of journalism to carry out subversive and anti-national activities. And if any one among them is detained by the law enforcing agencies for questioning, a well-knit network of the ISI launches propaganda across the world that journalists are being harassed and intimidated in Kashmir,” he said.

“A large number of local Kashmiri journalists are sympathizers towards the cause of terrorists and have anti-national persuasion. It is this network which provides legitimacy to the OGWs of terrorists in becoming journalists and carrying out safe transportation of illegal arms and ammunition through unconventional routes and away from the security forces,” the officer revealed.

According to sources and eyewitness Rayees Bhat used to attend official functions in Anantnag and even in Srinagar as a journalist and was providing terrorists all possible help including food, shelter, logistics and transportation from one place to another.

“He was in touch with terrorists and initially was an over-ground worker (OGW) of terrorists before becoming active himself August last year. He would visit the now defunct Kashmir Press Club in Srinagar which would give legitimacy to him as a journalist,” they revealed.

Over the last few years a hue-and-cry has been raised by a section of media bodies within and outside Kashmir that the functioning of the journalists is being “slowly choked” and “extensive curbs” are being imposed on media-men from discharging their professional duties. They cite arrests and questioning of a few journalists for their posts on social media or news portals as examples of press muzzling in J&K.

They term detention of Asif Sultan, who has been jailed since August 2018, as “assault on freedom of press.” But, they never mention that the police investigations have revealed that Sultan was in constant touch with Hizbul Mujahideen terrorists.

Prior to that in 2019, he was arrested for terror links and Public Safety Act (PSA) was slapped against him by the J&K Police. However, he managed to get a bail. A senior journalist, who wished anonymity fearing reprisal from terrorists, said there have been multiple cases where clear evidences have been found against few media-men of their involvement in anti-national activities.

“But as soon as police and other agencies take any action against such journalists, their masters across the border get activated and launch a tirade against the government of India curtailing press freedom. Reality is that over a dozen journalists, including Shujaat Bukhari, were killed by terrorists in the last three decades. But nobody speaks about it,” he said.

Another point which media bodies within and outside the country ignore repeatedly, the journalist said, is the threats posed by terrorists and their networks against bonafide journalists in Kashmir.

“For several years, death threats were being issued against journalists in Kashmir on a website (kashmirfight.wordpress.com) which was being run from Pakistan. But no media body or human rights group spoke a word against it. They only do India bashing if any journalist having terror links is called for questioning by law enforcing agencies,” he rued.