FBI Director adds more muscle to US pushback against China 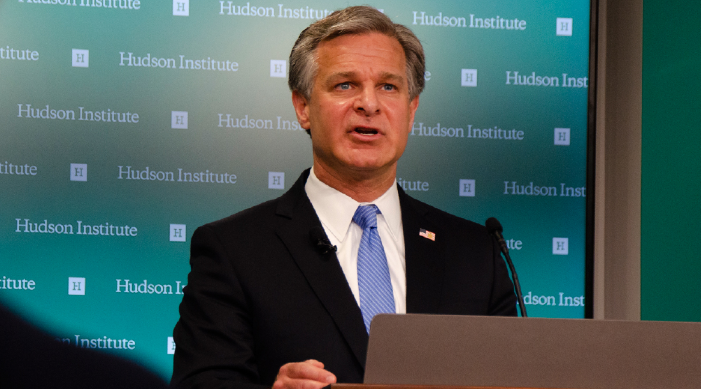 FBI Director Christopher Wray during an address in Washington on Tuesday

The chorus from within the United States government against China’s recent actions and the threats it poses to the US and the rest of the world is growing louder by the day.

In a scathing indictment of the country’s regime, Federal Bureau of Investigation Director Christopher Wray has said that the greatest long-term threat to the United States is “the counterintelligence and economic espionage threat from China”.

This was a threat to US economic security, and by extension, to its national security, he said during an address at Washington’s Hudson Institute on Tuesday.

The matter had reached a point where the FBI was opening a China-related counterintelligence case about every 10 hours, he said in support of his assessment.

Almost half of the nearly 5,000 active FBI counterintelligence cases currently underway across the US are related to China, he pointed out.

Taking China head-on, he said the US people were the victims of “Chinese theft on a scale so massive that it represents one of the largest transfers of wealth in human history”.

During his address, Wray highlighted a key element of China’s actions in recent years - a programme known as “Fox Hunt” that has been spearheaded by Chinese General Secretary Xi Jinping since 2014.

He described Fox Hunt as a sweeping bid by General Secretary Xi to target Chinese nationals whom he sees as threats and who live outside China, across the world. “We’re talking about political rivals, dissidents, and critics seeking to expose China’s extensive human rights violations,” the FBI Director pointed out.

According to him, hundreds of the Fox Hunt victims that the Chinese target lived in the United States, and many were American citizens or green card holders. The Chinese government wanted to force them to return to China, and China’s tactics to accomplish that were shocking, he said.

“For example, when it couldn’t locate one Fox Hunt target, the Chinese government sent an emissary to visit the target’s family here in the United States. The message they said to pass on? The target had two options: return to China promptly, or commit suicide,” he stated.

Describing China’s current regime as authoritarian and dangerous, O’Brien had pointed out that the Chinese government had charged almost 500 Chinese citizens for speaking out about the coronavirus during the first three months of the year.

He had also condemned the Chinese government for its ill-treatment of Uighur Muslims in the Xinjiang region.

Over the past several years, draconian laws and reports of arrests, detention, and disappearances of vocal critics of the CCP regime from China and other parts of the world have come in for global condemnation.

China and the Chinese Communist Party have also come under intense international scrutiny after being accused of suppressing and withholding vital information after the coronavirus outbreak was first reported in Wuhan late last year.